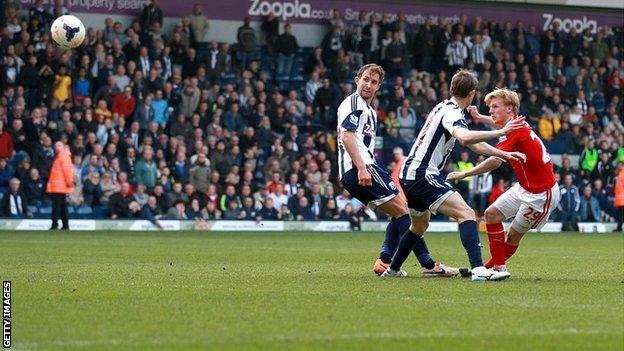 The Bluebirds had already fought back once as Jordon Mutch and Steven Caulker replied to early goals from Morgan Amalfitano and Graham Dorrans.

But after Bifouma looked to have earned West Brom boss Pepe Mel his first win at The Hawthorns, Daehli struck.

Cardiff remain in the bottom three.

Daehli's deflected effort came from the last kick of the game, a remarkable end to an enthralling match.

And although the fortitude Cardiff showed to come back twice will impress manager Ole Gunnar Solskjaer, he will be frustrated by his side's poor start where they conceded twice in the opening nine minutes.

The point moved the Bluebirds above Sunderland, who play on Monday, into 18th place but they still trail West Brom by three points - and Mel's side have a game in hand.

Both managers exchanged a friendly hug at the end of the match, yet both will know that with only a handful of games left, it is victories that are needed to secure Premier League safety.

When the disappointment of failing to extend their advantage on the bottom three has dissipated, Mel will recognise his side at least stopped Cardiff from drawing level on points with the Baggies.

Quick on the draw

Pepe Mel has now drawn five of his 10 Premier League games in charge and has only won one game.

And the Spaniard will be encouraged by the opening period, with the visitors' five-man defence cut open with ease.

There appeared little threat as Amalfitano gathered the ball after Ben Foster's kick was flicked to him. But the French winger caught David Marshall unaware and, with the ball still bouncing, lobbed the Cardiff keeper from outside the corner of the penalty area.

Though a 5-3-2 formation should provide solidity, Solskjaer's side conceded midfield dominance and went further behind, with Amalfitano involved again.

His chipped diagonal ball looped up to Matej Vydra, with the Czech striker calmly cutting the ball back for the advancing Dorrans to score.

Following his team's nightmare start, Solskjaer switched to a 4-5-1 formation to restore some control and, after Fraizer Campbell went close, Mutch caught Foster out with a lob from a similar position to Amalfitano.

With his side having found their confidence again, Solskjaer again changed approach as he brought on Wilfried Zaha in place of Fabio on the right of midfield, with Craig Bellamy moving further forward.

The influence of Manchester United loanee Zaha grew as the second half progressed, after West Brom had two chances to extend their lead when Vydra's toe-poke was saved and James Morrison sent the follow-up over.

West Brom fans continued their support for Jeff Astle's widow, Laraine, who has called for a public inquiry into head injuries after the former Baggies striker died of a brain trauma in 2002.

It proved a costly miss as Cardiff drew level. Again, there were questions over Foster as Caulker rose to head Gary Medel's free-kick back over the England goalkeeper.

The game looked to be petering out until substitute Bifouma pounced on Saido Berahino's cross for what looked like the final flourish. Daehli had different ideas when he tucked in following Zaha's centre.

West Brom manager Pepe Mel: "I don't understand - four minutes are four minutes. Apparently an extra minute was played because we scored the goal but there is no point talking to the referee because it can't be solved.

"The changing room is quite bad but they will see tomorrow that we played a good game and the result should have been a better one for us."

Cardiff boss Ole Gunnar Solskjaer: "It was very exciting but I think I've calmed down now.

"I'm so happy for the players and fans that we got the goal we deserved because we did not deserve to lose that game - absolutely no chance.

"We started really, really badly - I have never seen us so pedestrian but the reaction was magnificent and it says it all about the team and the supporters who sucked the ball in for us."