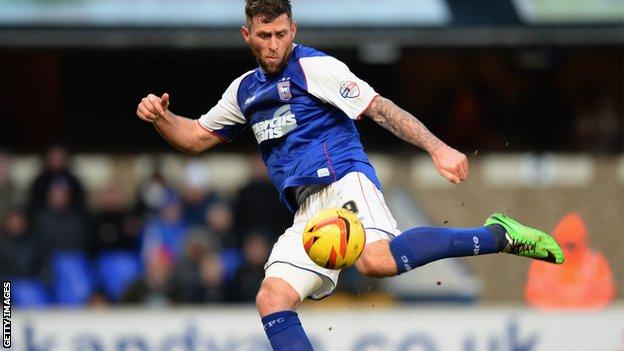 Daryl Murphy's header earned Ipswich a point at home to Nottingham Forest and denied their play-off chasing rivals a first win in 10 matches.

Jamie Paterson almost doubled the advantage with a deflected shot, before Sylvan Ebanks-Blake was denied an equaliser by a smart Karl Darlow save.

Forest on a downward spiral

Nottingham Forest were undefeated in 16 matches in all competitions when they beat Huddersfield 3-0 on 11 February. Since then they have gone 10 games without a victory.

The keeper then denied Murphy, but the striker levelled to leave both sides sitting two points off the play-offs.

Reading's home draw with Huddersfield kept them in the final play-off position with seven games of the season remaining.

Forest's last win came at Huddersfield on 11 February and rounded off a run of 16 games without defeat.

Since then, they are yet to win and after sacking Billy Davies as manager last week, they go into the crucial final stages of the season with Gary Brazil still in caretaker charge.

His side led after just four minutes when ex-Ipswich loanee Collins found the net with an expertly-guided header.

Mick McCarthy's side were behind inside a minute in their win over Derby on Tuesday and they again responded admirably, with Stephen Hunt's searching low cross well held by Darlow, and Paul Anderson just missing the far post with a speculative volley.

Paterson worked space in the Ipswich area but his shot was deflected just wide of the far post on 24 minutes as Forest pressed for a second, while Jamie Mackie had a low shot saved by the feet of Dean Gerken.

Ipswich responded after the break and almost levelled when Aaron Cresswell's free kick was met by substitute Ebanks-Blake, only for Darlow to save superbly and Murphy to miss from the rebound.

The Forest keeper again came to the rescue with 20 minutes left when Murphy latched onto some tenacious play by Jonny Williams, but his curling effort was tipped round the post.

The Republic of Ireland International would not be denied though and headed his 11th goal of the season from Frank Nouble's cross.

Nottingham Forest caretaker boss Gary Brazil on his future: "I am sure I will speak with the owner over the weekend and there was a massive improvement from Tuesday night's defeat to Charlton.

"I am sure he will be looking at all avenues but while I have got the job, I will do it to the best of my ability. The players have been fantastic."