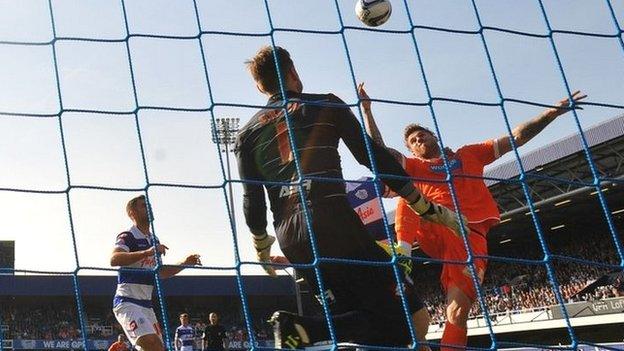 Junior Hoilett salvaged a point for Queens Park Rangers against strugglers Blackpool to leave them nine points away from automatic promotion.

Hoilett's impressive strike 12 minutes from time cancelled out a David Goodwillie header in the first half.

Goodwillie, on loan from Blackburn, took advantage of some sloppy defending to bundle home at the far post.

Chris Basham and Goodwillie both shot over as Blackpool threatened to increase their lead before the break.

Redknapp made an attacking change at the interval - sending on Hoilett in place of Nedum Onuoha.

Hoilett made an immediate impact, shooting wide after a fine run towards the penalty area, while Morrison had an effort saved by Matt Gilks as the R's continued to press.

And it was Hoilett who came up with the equaliser, denying Blackpool a first win at Loftus Road since 1972.

The Tangerines, beaten in 11 of their previous 12 away matches, defended resolutely in the final stages and Gilks did well to keep out a stunning strike from Morrison.

But as Rangers pushed forward they left gaps at the back and had an escape when substitute Thomas Barkhuizen got away from Richard Dunne only to shoot wide.

Queens Park Rangers assistant manager Kevin Bond: "I think it's going to be very difficult to go up automatically. It was always going to be, but we've made it more difficult.

"Burnley got beaten today and it was just an opportunity for us. The pace of the game was too slow. We weren't dynamic enough and couldn't get a tempo going. We had enough opportunities to win the game, but it wasn't our day."

Blackpool caretaker manager Barry Ferguson: "I'm happy to come away with a point. It's a good point, because our away form has not been great.

"I knew when I took over that things were not going to be easy, but the boys have responded in the last couple of weeks with two wins and a draw, so we're slowly getting there.

"I had to work hard on the way we defend and we've started to defend really well."