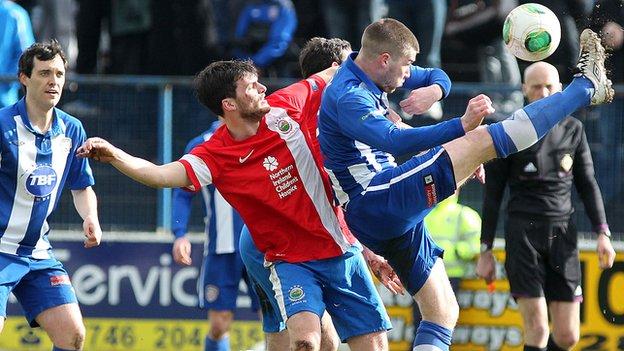 Blues midfielder Philip Lowry had the best first-half chances, heading over and firing wide before his fierce shot was saved by Eugene Ferry.

Linfield created more openings but Coleraine came closest to scoring when Howard Beverland's effort was headed off the bar and clear by Aaron Burns.

The gap to the Reds is still two points after they drew at Glentoran.

Linfield host Cliftonville next Saturday in what could prove to a decisive game in the destiny of the title.

Mark Haughey also threatened for the Blues in the first half, his header from a corner saved by Ferry.

Coleraine midfielder Gareth Tommons met a Ruairi Harkin corner and his glancing header was kept out by keeper Jonathan Tuffey.

Ferry made a good save from Michael Carvill's header before Tuffey denied Tommons again, this time blocking a powerful shot.

Beverland's header from a corner was goalbound but Aaron Burns was stationed on the line, and he managed to head the ball off the underside of the bar before the danger was cleared.

Haughey squandered a good chance when he headed weakly at Ferris from close range and Linfield penalty claims were turned down after Mulgrew went down under a challenge.

The final opportunity fell to Linfield, but there no way past Ferry as he palmed away a header from Lowry.

"We had to set up to make sure we didn't concede but also to be effective in attack," said Coleraine boss Oran Kearney.

"We did that and we created enough chances to win, as did Linfield.

"The final five games are important as it is imperative to put the building blocks in place for next season."