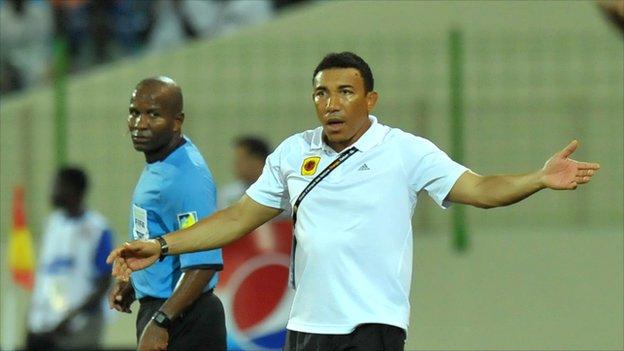 The 44-year-old has taken over at Belenenses to become the only African coaching a top-flight team in one of Europe's leading leagues.

Vidigal played for Angola at the 1996 Africa Cup of Nations finals and then coached them at the 2012 tournament.

Belenenses are threatened with relegation but Vidigal say he will work hard to keep the club in the top flight.

"We believe we can get out of this situation but the situation is not easy," he said on Friday as he took over.

"It will be important to work very hard to get out of the situation we are in. Of course it's difficult, but we all believe that we can overcome," he added, returning to the Lisbon-based club where he played between 1995 and 2002.

"I could not turn down the offer to come back and to work for the club where I graduated as a man and player," he said as second from bottom Belenenses prepared to travel to defending champions FC Porto on Sunday.

Lito Vidigal broke new ground for Africans by being appointed coach of Uniao Leiria in 2009, thereby becoming the first African international to coach at a top flight club in Europe.

He later coached Angola and had a spell with AEL Limassol of Cyprus. His last job was in Libya at Al Ittihad.

Last season former Egypt international Hany Ramzy had a spell as coach of Lierse in Belgium. He took over in November 2012 at the club owned by Egyptian tycoon Maged Samy but stayed only six months.

Former Malawi coach Eddington Ng'onamo has been working in the lower leagues in Europe while Italian Lega Pro 1 side Reggiana have just appointed former Nigerian player Matthew Olorunleke as their head coach.

There have been several African-born coaches of major European national teams and clubs, mainly from the colonial era, like Morocco-born Just Fontaine in charge of France and the Mozambican-born Juca, Mario Wilson and Carlos Queiroz in charge of Portugal.