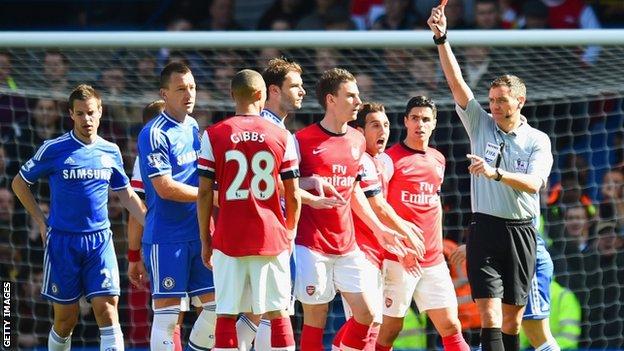 Referee Andre Marriner has apologised for sending off Arsenal defender Kieran Gibbs by mistake during the Gunners' 6-0 defeat by league leaders Chelsea.

A penalty was awarded after Alex Oxlade-Chamberlain tipped Eden Hazard's shot around a post with his hand but Gibbs was shown the red card.

Oxlade-Chamberlain seemed to tell Marriner that he was the culprit but the original decision stood.

A statement read that Marriner was "disappointed" to have made the error.

Referees' body the Professional Game Match Officials Limited said in the statement: "Incidents of mistaken identity are very rare and are often the result of a number of different technical factors.

"Whilst this was a difficult decision, Andre is disappointed that he failed to identify the correct player.

"He expressed his disappointment to Arsenal when he was made aware of the issue."

Left-back Gibbs seemed confused at receiving the red card, protesting his innocence, along with his team-mates, before leaving the field.

Hazard's shot was heading inches wide of goal before Oxlade-Chamberlain dived to his left to divert the ball with his fingertips.

Former top-level British and World Cup referee Clive Thomas, who said in 2012 he had lost faith in modern officials, believes the four in charge of Saturday's game should be banned for the rest of the season.

"It's the most disgusting, shocking decision I've seen. In my opinion these four wouldn't officiate another Premier League game this season," the 77-year-old Welshman told BBC Radio 5 live.

Thomas officiated at the 1974 World Cup in West Germany and the tournament in Argentina four years later, where he is remembered for disallowing a Zico headed goal for Brazil in a group game against Sweden by blowing for full-time while a corner ball was still in mid-air.

"Unless one of his officials can call him over and say you got the wrong player, which did not happen, he has to go on what he thought was correct.

"You cannot rely on players then trying to say 'I did this'. He made the decision in good faith and should not be stood down - he is one of the leading referees in Europe and his confidence would be shattered. Whenever he goes back the focus will inevitably be on him."

"The ball went out and I think it's Chamberlain who touched the ball," said Wenger. "I don't know who gave indication to the referee that it was handball but he has certainly not seen it."

Chelsea manager Jose Mourinho, added: "It is the kind of situation where if you have a TV, the fourth official could see it was not Gibbs. Unfortunately the wrong boy came off."

Marriner appeared to consult one of his assistants before awarding the penalty.

The Football Association tweeted clubs "can appeal mistaken identity, although the FA can pro-actively review also".

In November, Preston had the wrong man sent off against Port Vale in League One.

Striker Joe Garner was suspended retrospectively for three games despite midfielder Neil Kilkenny being shown the red card during the match.