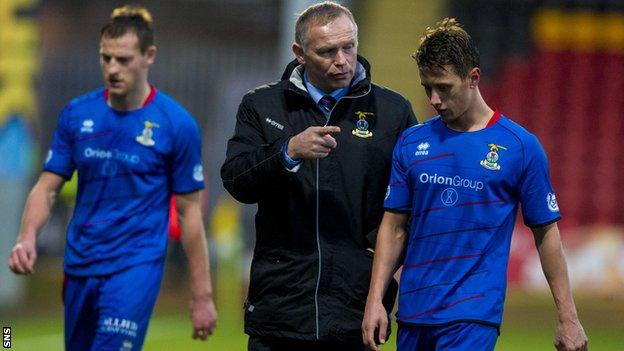 After his side's 1-0 win over Partick Thistle, Inverness manager John Hughes said that they can win at Tannadice if there is a strong referee in charge.

"If a strong referee allows us to play our own game we've got every chance of beating them," he told BBC Scotland.

Dean Brill made a number of saves to deny Partick Thistle in the first-half as Hughes side started slowly.

After the break it was all Inverness, and once Greg Tansey and McKay had passed up chances they finally found the net after a goalless 524 minutes.

"I don't think it was a classic by any stretch of the imagination," admitted Hughes. "We were a little lacklustre in the first half but we hung in there.

I don't think we got allowed to play our own game the last time we played Dundee United.

"Second half we were much better, played with a lot more energy and could have scored another couple of goals. Billy's missed a great chance before he's scored the header.

"It was important we got back to winning ways, it gives the boys confidence again. Nine games to go we've everything to play for.

"The effort, commitment and the shape of the team in the second half was very pleasing. We kept a clean sheet once again which we pride ourselves on.

"I'm pleased for the boys. In the first half they were out on their feet, but as a manager you cannot give them an excuse so I asked them to play with just a bit more energy in the second half, and once again they've given me everything they've got."

Jackie McNamara's men await the visit of Inverness on Wednesday evening with both sides trying to close the gap on the Europa League qualifying spots.

"Hopefully it gives us the confidence to go to Tannadice and have a right good go," Hughes said of the trip.

"Sometimes you can go there and try too hard and that spoils your shape. It's important we go there and be disciplined, have trust in each other and pass the ball. It only takes one goal to win a football match if we keep a clean sheet.

"Dundee United - we know their strengths and weaknesses, although there's not many weaknesses.

"I don't think we got allowed to play our own game the last time we played Dundee United, and that's sometimes being physical and getting stuck in."