The Blues were 2-0 up within seven minutes thanks to Samuel Eto'o and Andre Schurrle strikes and went on to record their biggest win over Arsenal.

"We came to kill and in 10 minutes we destroyed [them]," said Mourinho of his Premier League leaders.

"Ten amazing minutes, no doubt this game was our game. My analysis of the game is about the 10 minutes."

It was Mourinho's biggest Premier League victory as Chelsea manager and a result that ruined Arsene Wenger's 1,000th match as Arsenal manager.

Mourinho's Chelsea beat Wenger in his 500th game in charge of the Gunners in 2005 and the former Real Madrid and Inter Milan boss extended his unbeaten streak against the Frenchman to 11 games. 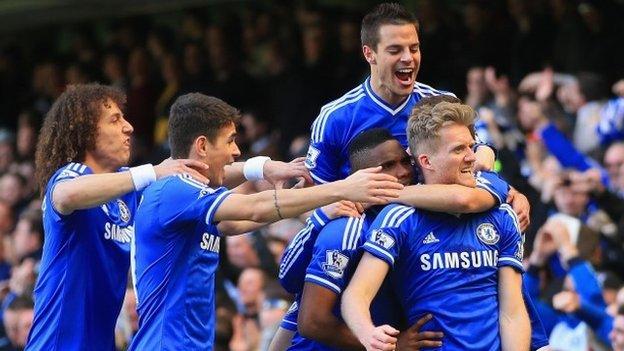 "The first 10 minutes were amazing," added the Portuguese.

"The way we started, the way we pressed them and recovered the ball, it was fantastic. Everyone in the stadium felt it would be an easy Chelsea win after only 10 minutes and it was then easy and comfortable."

Mourinho does it again

Jose Mourinho has won six and drawn five of his 11 meetings with Chelsea against Arsenal boss Arsene Wenger.

Arsenal fell 3-0 behind after 15 minutes when Alex Oxlade-Chamberlain used his fingertips in a diving save to stop Eden Hazard's effort curling in.

Referee Andre Marriner subsequently awarded a penalty, from which Hazard scored, but appeared to send off the wrong player as he showed a red card to Kieran Gibbs.

Mourinho had sympathy for the referee, saying: "The player that should have been sent off was Oxlade-Chamberlain. It's the kind of mistake when a screen with the fourth official would see the situation easily resolved, but football does not allow that and sometimes the ref has these kinds of difficulties."

Chelsea remain four points clear at the top of the league table, although second placed Liverpool have played one match fewer, while Manchester City - six points behind in third - have three games in hand.

Asked if their emphatic victory over Arsenal made Chelsea favourites for the title, Mourinho replied: "No. Obviously not."

He went on to point that his team had Champions League commitments while their rivals were no longer in Europe.

The Londoners face Ligue 1 champions Paris St-Germain on 2 April in the first leg of the Champions League quarter-finals, three days after a league tie with struggling Crystal Palace.

"We go match after match. We play Crystal Palace next and after that we go to Paris," he said.