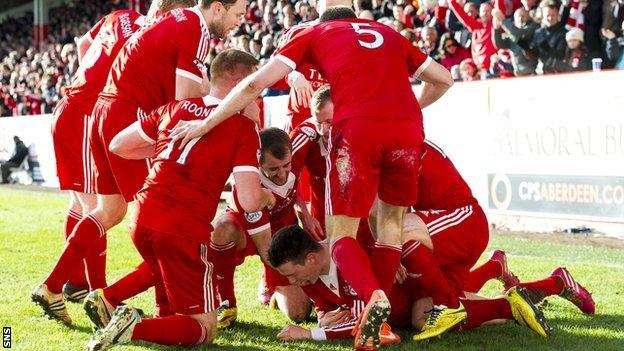 "Everybody expects those goals from Niall but that was all his performance was lacking in," McInnes told BBC Radio Scotland.

"If he scores the goal people view it differently."

The 26-year-old has netted nine times during this campaign, one which has seen Rooney take a large portion of the goalscoring responsibility.

Indeed, it was Rooney's low strike, his seventh for the Dons, which brought Aberdeen level after another top marksman, Kris Boyd, had given Killie something of a shock lead at a busy Pittodrie.

"McGinn played in an area that gave them problems time and time again," continued McInnes. "He was difficult to pick up, he linked closely with Adam Rooney and he can be very pleased with his performance today.

"I thought we were the better team prior to Kilmarnock getting themselves in front, just a wee bit of lack of concentration there possibly.

"But that was, I felt, Kilmarnock's only opportunity in the game. I thought we were outstanding from start to finish. We passed the ball well, moved the ball well, always probing and asking questions.

"Our movement as a front two, with McGinn and Rooney, was excellent. I always felt there was a goal in us."

The winner came in the 72nd minute when Mark Reynolds' low cross evaded Cammy Smith but fell nicely for Jack to steer home from 10 yards.

It keeps Aberdeen in second place in the Premiership on 57 points, the same tally as Motherwell who have played one game more.

"I said to the players to try and do more of the same and I felt the goal was always coming," added McInnes.

"We passed up a few opportunities and it was no more than we deserved, there were some good performances out there.

"It keeps us winning. It's important to keep winning, especially at home. It's three games in a week, that's the first one done.

"Now we go to Ross County on Tuesday and we're looking for a similar performance again."