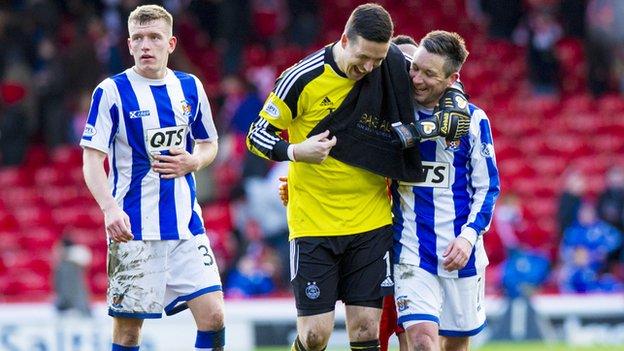 Manager Allan Johnston has challenged his Kilmarnock team to learn from Aberdeen's winning mindset after the Dons beat Killie 2-1.

Kris Boyd's early opener had put the East Ayrshire side in front but the hosts grafted to get the win.

"They've got the winning mentality," Johnston told BBC Scotland. "They're used to winning day-in, day-out and they just ground that win out.

"I don't think there was much in it between the two sides."

Adam Rooney and Ryan Jack replied to Boyd's 19th goal of the season to make it three Aberdeen wins out of three against Killie during the 2013-14 campaign.

And afterwards Johnston challenged his charges to learn from the defeat.

"Just pointing out really that that's where Aberdeen are for a reason, the desire they've got and the mentality," he said.

"We've got to get that instilled in our game as well. It's a difficult place to come and when you go in the lead you're hoping it's your day but it wasn't to be.

"We looked quite good on the counter-attack, we caught them a couple of times. We maybe didn't pass the ball too well but I don't think Aberdeen did either.

"Maybe in the second half we got a bit too deep and invited them on top of us.

"We looked solid but to lose a goal from a free-kick, especially when we'd showed them they'd done that against Inverness the week before, was very disappointing."

With Partick Thistle, Ross County and St Mirren all losing on Saturday, it means Kilmarnock remain in eighth place in the Premiership, but only three points separates them and the relegation play-off spot off 11th.

Johnston knows his players will need to be up to the challenge in the remaining seven league games.

"We need big characters in the dressing room and we need people getting on the ball," he added. "We can't afford people hiding.

"We've got to take responsibility, get on the ball, make things happen and defend as a team as well."