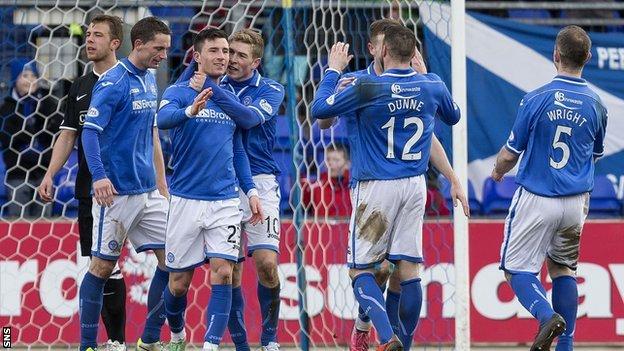 St Johnstone assistant manager Callum Davidson was thrilled to oversee the 2-0 victory against Hibernian that clinched the club's top-six place.

It provided absent manager Tommy Wright, in hospital after gallbladder surgery, with a welcome pick-me-up.

Davidson said: "I can barely speak. I've lost my voice!"

"I'm delighted for Tommy. He phoned me after the game, asking me why I'd made certain decisions. But he was delighted for everyone at the club."

The Northern Irishman picked the starting line-up from his sick bed and tuned into the match on the radio as a first-half Steven MacLean strike and a second-half Ryan McGivern own goal sealed the win they needed to end Hibs' own top-six ambitions.

"That's three times in a row we've been in the top six, which is a big achievement for a club like St Johnstone," said Davidson.

"The chairman had to cut the budget this year and we did cut a lot of costs, but we've managed to get there again.

"The boys just give Tommy stick but he'll be back shouting at them soon. I think he had the game on the radio. He shouldn't have been doing that for his stress levels, but he picked the team after we discussed it and I just passed on what he said.

"As a group of players we've got one goal - to get to the top six and do well in the cup competitions - so we're halfway there."

Hibs keeper Sean Murdoch, drafted in because Ben Williams' wife had gone into labour before the match, was culpable for MacLean's opener after he flapped at David Wotherspoon's corner, but he then made some magnificent saves to keep the score down.

With Saints, who have a Scottish Cup semi-final against Aberdeen next month, having lost 1-0 at home to Ross County seven days earlier, Davidson added: "We asked for a reaction from the boys and that was a very professional performance.

"I thought Hibs had control of the game in the first half but we had the better chances. Once they had a man sent off we couldn't have asked for any more.

"We want to chase Inverness now in the three games we've got left before the split against St Mirren, Kilmarnock and Partick Thistle."