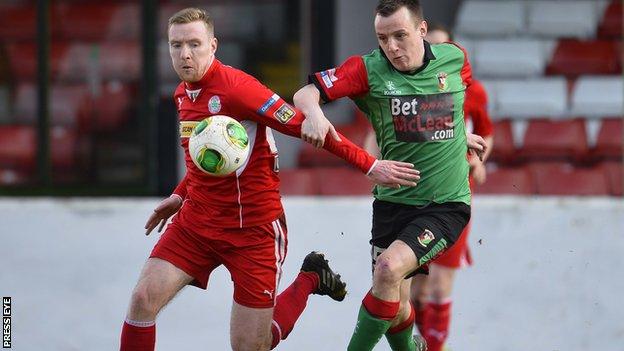 Cliftonville missed the chance to close the gap on league leaders Linfield as they could only draw 0-0 against Glentoran at the Oval.

The wasteful Reds created numerous opportunities but a combination of poor shooting and brilliant goalkeeping by Elliott Morris denied them any goals.

Chris Curran had a goal disallowed in the first half for hand ball.

Liam Boyce and Joe Gormley missed a glut of chances for Cliftonville who remain two points adrift of Linfield.

The reigning league champions created most of their chances in the first half but failed to break the deadlock.

The movement of Gormley and Boyce caused huge problems for the Glentoran defence, particularly after Jay Magee hobbled off midway through the first half.

Joe Gormley was through one-on-one against Elliott Morris after ten minutes but the Glentoran goalkeeper denied Cliftonville an opening goal.

Both sides hit the woodwork in the first half. Liam Boyce's shot came off the crossbar before Glentoran almost took the lead, against the run of play, when Curtis Allen's shot hit the far post and bounced to safety.

Cliftonville should have taken the lead immediately after the restart when Darren Boyce latched on to Conor Devlin's long clearance. He ran through one-on-one against Morris but dragged his shot wide.

The opportunities began to dry up for the Reds in an evenly contested second half although Joe Gormley spurned several half chances in the last ten minutes as Cliftonville stay two points behind leaders Linfield.