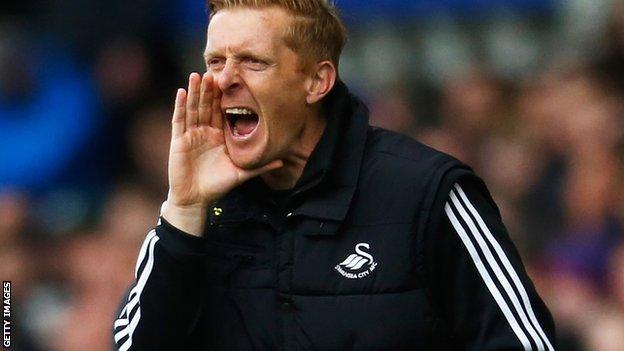 Leighton Baines had scored from the spot to give Everton the lead and Wilfried Bony equalised for the Swans.

But goals from Romelu Lukaku and Ross Barkley in a five-minute spell set Everton on their way to victory.

"We just left ourselves with a little too much to do because of that five-minute period," Monk said.

The Swansea head coach was pleased with his side's efforts but was left frustrated by the second half period in which Everton scored twice.

"I think we worked well again. We were creating chances and putting pressure on the keeper," Monk said.

"I'll never doubt the effort and what they're trying to do for the club and themselves.

"They want it so badly which is great to have in a group. But in any game there's a period where the opposition will have some pressure.

"It's about dealing with that pressure properly, making the right decisions on and off the ball when we're marking.

"It's basically going back to basics, doing it properly and we didn't do that in the five minutes and it cost us."

Defeat at Goodison Park left Swansea without a win in five league games and they remain just four points above the relegation zone.

Swansea have eight games remaining, the first of which is Tuesday's rearranged game at Arsenal. Monk acknowledges his side need points to pull themselves away from teams at the bottom of the table.

"We have to get points on the board as soon as possible and that's a big thing for us," Monk added. "It's the business end of the season and points are what you're after and what you're hungry for.

"We don't want to become a team that put in all that effort and displays and have nothing to show for it.

"It's about trying to change it as soon as possible."