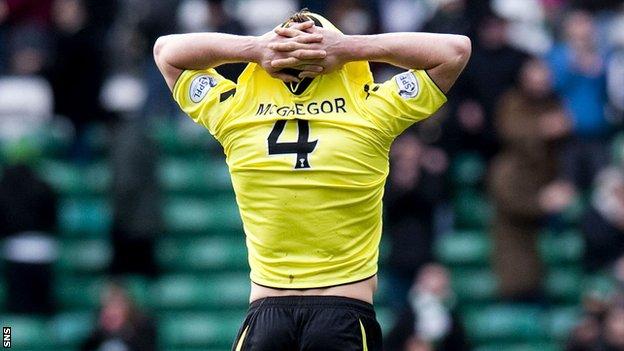 St Mirren manager Danny Lennon believes his side are well equipped for the Scottish Premiership run-in, despite a second straight defeat.

The Buddies lost 3-0 at Celtic Park but results elsewhere meant they are no worse off in the table.

The Paisley side, who are 11th, remain two points behind Ross County and Partick Thistle.

"We're getting absolutely everything out of them," Lennon told BBC Radio Scotland.

"Yes, we've come away empty handed but we're not playing against that quality in the remaining eight games of the season.

"If we can continue that momentum in the remaining eight games of the season, we'll be fine."

"I'm taking a lot of positives out of that one," Lennon reflected.

"For any team in Europe, never mind Scotland, coming to Parkhead is a tough challenge to try and get a result.

"I thought we came here and performed to a good standard and there were a lot of pleasing aspects within the game that I was delighted with.

"We had a lot of entries into their box and I counted that we had 12 attempts at goal and that's a big task at Celtic Park.

"Over the piece, Celtic deserved to win the game in terms of the opportunities that they created."

St Mirren face St Johnstone, Inverness and Motherwell before the Premiership split as the Buddies aim to avoid finishing in the relegation play-off spot they currently occupy.

"What we have to make sure is that we bring the same ingredients," Lennon added.

"We [need to] bring the same level of commitment, follow the game plan and bring that one or two percent that are going to get us goals, helps us turn that into points and push us up this table. That's what we're all striving for."