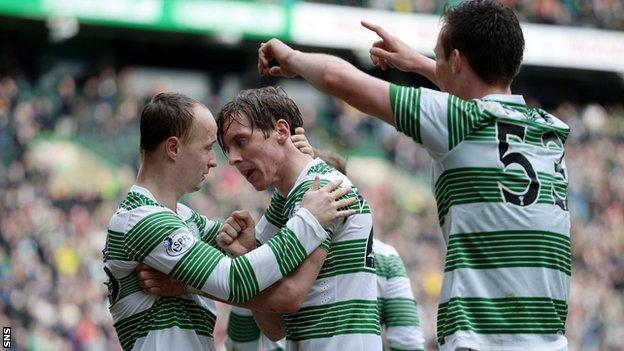 Celtic manager Neil Lennon urged his team to maintain their momentum as they close in on a third successive title.

The 3-0 win over St Mirren took Lennon's men to within four points of clinching the Scottish Premiership.

"It's just all about us now getting over the line as quickly as we can," a delighted Lennon told BBC Radio Scotland.

"I'm very pleased again. I thought, second half, we were terrific. The only criticism was we were a bit wasteful in front of goal, otherwise the score would've been a lot more impressive.

"We missed a couple of good chances but, second half I thought we dominated the game. We're playing some really good attacking football.

Johansen's goal was his first for Celtic since joining during the January transfer window.

"He got better as the game went on," Lennon said of the Norway midfielder.

"It was a great ball in from Leigh and it was just that bit of quality we were looking for."

Celtic make the short trip across Glasgow to face Partick Thistle on Wednesday and could seal the title that night if Aberdeen slip up on Tuesday against Ross County.

"It's going to be difficult at Partick. They've had a couple of decent home wins and they're a decent team."

And Lennon offered some solace to his namesake Danny, whose St Mirren side are locked in a battle to avoid finishing second-bottom and entering a relegation play-off.

"I think St Mirren are good enough to stay out of it," added the Celtic boss.