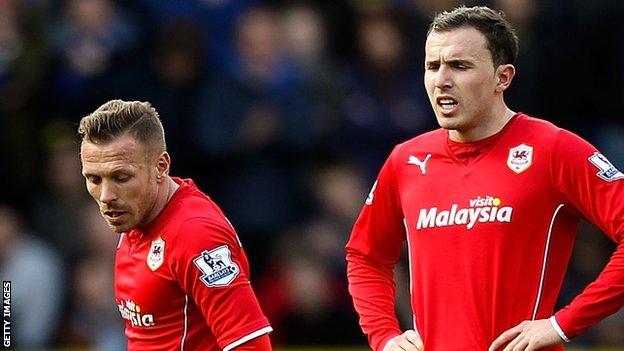 Cardiff are second from bottom on 25 points, with West Brom three points and three places above them.

"We can't carry on like this. We need points next week. That's for definite," said Solskjaer.

After West Brom, Cardiff face another team with relegation worries in Crystal Palace - one of seven games left for the Bluebirds in their first Premier League season.

However, Solskjaer believes Cardiff's performance against Brendan Rodgers's side has left them better placed mentally than before the game.

We tested Liverpool defensively and we scored some fantastic goals, and maybe we conceded two poor goals

Cardiff twice took the lead in the first half against the Reds with Jordon Mutch and Fraizer Campbell scoring.

But by the time Mutch added a second, the hosts had conceded five goals and Luis Suarez went on to complete his hat-trick.

"That's the big plus today apart from the attitude and the desire, the start [Cardiff put in]," said the former Manchester United striker.

And Solskjaer believes his side should not have had to defend a corner from which Liverpool took the lead while down to nine men after two of his players were sent to the sidelines for treatment.

The Cardiff boss said Mutch received no treatment at that point while Kevin Theophile-Catherine had some attention to a head blow.

Martin Skrtel scored the second of his goals while Mutch and Theophile-Catherine were absent.

Solskjaer said: "I told the fourth official... we should get them on.

"It was one-and-a-half minutes at least where those two were stood watching; I said 'they're going to score'.

"That ruling is an absolute shambles. Two different incidents and you get all these excuses and explanations - for me [it's] nonsense.

"They're [Liverpool] a counter-attacking team. And then that decision to send my two players out or decision not to bring them in - two big lads as well to be fair - of course killed us."

Even so, the former Norway international was pleased with his side's performance, particularly in the first half.

"We've had purpose in the games before, but we've not started as well," said Solskjaer. "We started really well on the front foot, put them on the back foot.

"We got 1-0 up, got other chances and were delighted with the first half.

"We tested them defensively and we scored some fantastic goals, and maybe we conceded two poor goals.

"Liverpool didn't have a lot in the first half, chances-wise."