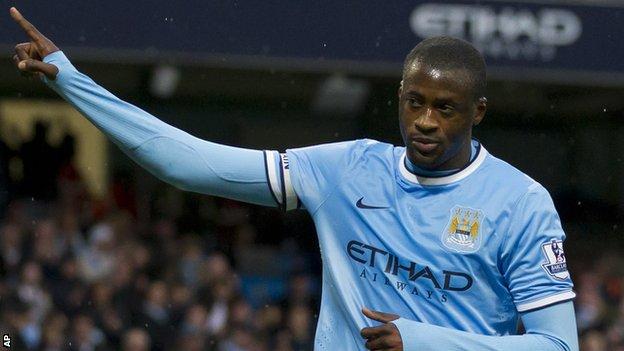 Manchester City boss Manuel Pellegrini underlined the importance of Yaya Toure to his side's title challenge after the Ivorian's hat-trick inspired them to a 5-0 thrashing of 10-man Fulham.

City's victory took them third in the Premier League with a superior goal difference over their title rivals.

"He's a very important player and scoring 20 goals for a midfielder is not easy," said Pellegrini.

"At the beginning of the season, Toure received some criticism for not defending well, but it's easy to tell him to stay back and not give him freedom."

Pellegrini's side moved above Arsenal, who were hammered 6-0 at league leaders Chelsea, with second-placed Liverpool winning 6-3 at Cardiff.

City are six points off the top but have played two games less than Liverpool and Arsenal and three matches fewer than Jose Mourinho's side.

"I don't think it's just between Chelsea and Man City as favourites," added the Chilean.

I'm not happy with our performance after the second goal

"We must continue considering what Liverpool are doing because they are playing well and scoring goals.

"Arsenal had a bad game but are seven points behind Chelsea with one game in hand so the four teams have the same chance to win the title."

City, who have not conceded a league goal in their last four matches, have 10 league games left beginning with the Manchester derby on Tuesday and a trip to the Gunners next Saturday.

"It was a complete performance because we kept a clean sheet again, it's important in the last part of the season," said Pellegrini. "We must be very balanced, not only scoring but not conceding easy goals."

With top goalscorer Sergio Aguero missing, Alvaro Negredo started up front for City in place of the sick Edin Dzeko, although the Bosnian could return for Tuesday's trip to Old Trafford.

Fulham boss Felix Magath was unhappy with that decision, but there were no complaints about the second spot-kick as Amorebieta scythed down David Silva to receive a red card.

Toure, 30, grabbed his third with a stunning strike before late goals by Fernandinho and Martin Demichelis sealed the convincing victory.

Magath, whose side remain bottom of the table and are four points from safety with seven games left, said the second penalty after 54 minutes led to his side giving up.

"I'm not happy with our performance after the second goal," said the German coach.