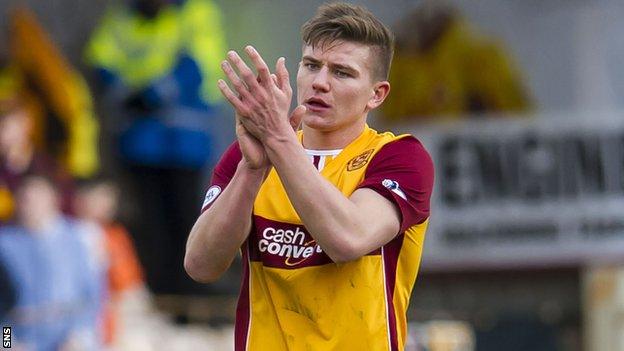 Stuart McCall said he still hopes to keep Shaun Hutchinson for next season after his side boosted their European hopes with a 2-1 win over Ross County.

The Steelmen survived a late onslaught when Yann Songo'o pulled one back after goals from James McFadden and John Sutton.

Hutchinson has been linked with a move to Rangers, but McCall is keen for the centre-back to sign a new deal.

McCall said: "It's not dead and buried yet, we'll try to keep him."

Hutchinson is out of contract in summer and the club risk losing the 23-year-old for nothing.

"We've managed to keep him a little bit longer than I first thought," said the Fir Park manager. "When I first came to the club I might have thought he'd have gone inside a year. In fairness we've had offers for him but the club has resisted them.

"If he goes in the summer we don't get any money for him and we know that. We've still got to offer him a deal and we'll see where it takes us.

"He just gets on with his game and if we do lose him in the summer he'll go with our best because he's been a really good servant."

Motherwell initially struggled to break down the Dingwall men until McFadden pounced to net the rebound after Iain Vigurs' powerful strike.

They doubled their lead in similar fashion when Sutton was first to the loose ball as Mark Brown kept out Craig Moore's swerving shot.

"What we've done of late is been clinical," McCall said. "Unfortunately today we weren't.

"If we had been clinical in the first-half the game would have been put to bed. We've had three or four excellent chances.

"I was a lot happier with our performance today than I was the other night against Inverness. Second half, we got two goals and it looks like the next one is around the corner, but the Achilles heel comes back to bite us again.

"We couldn't defend a set play and it made the last six or seven minutes a lot edgier than it should have been.

"But, overall it was a good performance and a good three points.

"We went to Hibs and got a draw a few weeks ago, and then we had three home games on the bounce and we wanted to take full advantage of that.

"We've managed to win two. We've got Kilmarnock coming here next Saturday and we've got to show the same endeavour and play as we've done today."