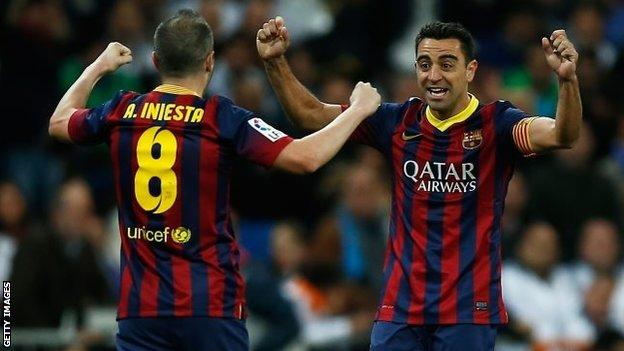 The World Cup is only 81 days away, with the opening match between host nation Brazil and Croatia taking place in Sao Paulo on 12 June.

Andy Brassell: "The demise of Barcelona's - and Spain's - midfield appears to be greatly exaggerated. Analysis of Barcelona's thrilling 4-3 win in Sunday's El Clasico will rightly focus on the contribution of Lionel Messi. Yet coach Tata Martino underlined the "great work" of his international midfield quartet of Xavi, Andres Iniesta, Sergio Busquets and Cesc Fabregas in his post-match news conference.

"Iniesta, playing in an advanced role on the left, opened the scoring - while Xavi had more touches than any other player (116) and enjoyed a pass completion rate of 96%.

"It was a strong riposte to an international audience who perhaps doubt Spain's ability to defend their World Cup crown this summer - and their midfield's ability to carry their hopes.

"The potential rivals for the Barca group's spots had quiet weekends. Bayern Munich's Thiago Alcantara - Spain's captain in last year's Euro Under-21 triumph - missed the trip to Mainz. His team-mate Javi Martinez, meanwhile, was again used at centre-back by Pep Guardiola - reminding us of his viability as a potential replacement for injured Barca skipper Carles Puyol."

Quaresma to join Ronaldo in Brazil?

Andy Brassell: "Ricardo Quaresma is quickly closing any debates over the bargain of the January window. The 30-year-old Portugal winger returned to Porto on a free transfer in January after five and a half years away, and has been magnificent.

"He has eight goals in 15 starts, all competitions included, the latest of which was an outrageous solo effort as Porto eliminated Napoli from the Europa League last Thursday.

Ricardo Quaresma's career is back on the rise following his free transfer move to FC Porto.

He was released from his contract early by Besiktas in 2012 and joined Dubai club Al Ahli, whom he left in May.

He had been unattached for over half a year before returning to Porto.

"Many in Portugal believe that Quaresma has even more natural talent than Cristiano Ronaldo, but when they both left Sporting Lisbon in 2003, the paths took different directions. Quaresma flopped at Barcelona and Inter, and saw a loan spell at Chelsea hit the buffers when Luiz Felipe Scolari was sacked days after signing him.

"It is widely assumed that Quaresma's application has always been lacking - in particular contrast to Ronaldo - but his workrate has been exemplary since returning home. With the fitness and form of Nani, Vieirinha and others a cause for concern, Quaresma's chances of making Portugal's flight to Brazil is rising by the day."

Antonio Cassano is set to be given a World Cup chance after two years out of the Italy team, and he wants fellow Serie A veteran Francesco Totti to join him.

Parma forward Cassano, 31, has not played for Italy since Euro 2012 but boss Cesare Prandelli has opened the door to him because of his club form.

The striker said earlier last week he is in fine shape to win a place in Italy's World Cup squad - after losing 10kg by eating less focaccia.

Prandelli said: "After the European Championship, we wanted to look forward. Cassano was 30 years old and we thought that other players would develop.

"If these players have not developed as we had hoped and a player is playing better at 32 than he did at 30, then why not select him?"

Cassano, who has scored 11 league goals this season, played with Roma's 37-year-old skipper Totti for five years and believes his form should earn him an Italy recall, despite having not played for his country since 2006.

"Checco [Francesco] is phenomenal. Even at 37, 38 years old, he's scary to play against. I would pick him every time," Cassano told Corriere Dello Sport.

Bayern Munich winger Julian Green has opted to play for the United States instead of Germany and is hoping to earn a call-up for the summer's World Cup in Brazil.

The 18-year-old, who is a dual citizen having been born in Florida and raised in Germany, has pledged his international allegiance to the States and will join in a training camp before their next friendly versus Mexico in April.

"He is a very special talent. We wanted him to feel comfortable with our program and listen to his heart when making this decision," US coach Jurgen Klinsmann said.

Since leading the Black Stars to the World Cup, Appiah has had to deal with rumours that the Ghana FA wants to bring in a foreigner to assist him in Brazil.

"He's been the one that we've been with during the qualification so we, the players still believe in him," Asamoah told BBC World Service.

Appiah will visit Liverpool his month as part of an ideas-sharing tour to England. Appiah and goalkeeping coach Nassam Yakubu will observe Liverpool's preparations for matches.

Nigeria striker Victor Anichebe says he has not been asked to return to the national side having recently put his international career on hold.

Anichebe, 25, told BBC Sport: "I haven't spoken to anybody, that goes from the federation to Stephen Keshi himself. We will see what happens."

The States ready for risk in Brazil

United States assistant coach Andreas Herzog believes they are prepared to "play with risk" in Brazil.

Herzog, who is Austria's most capped player, was team-mates with US head coach Jurgen Klinsmann at Bayern Munich in 1995-96.

He told BBC World Service: "We have the same philosophy and this is a great experience for me. He was a striker, I was an offensive midfielder. We both like to play with a bit of risk up front."

Switzerland international Philippe Senderos expects the World Cup in Brazil to be a party.

The former Arsenal defender, who plays for Valencia, is part of a Swiss squad who have qualified for a third successive World Cup.

He told BBC World Service: "It is a massive achievement for such a small country. This is the dream that every kid dreams about. I always think football was born in Brazil in my head. This World Cup I can only think of as a party."

Mexico coach Miguel Herrera admits he is concerned by the lack of opportunities striker Javier Hernandez is getting at Manchester United but believes his side will be stronger without former Arsenal forward Carlos Vela.

Hernandez, 25, has made only four Premier League appearances for manager David Moyes at United this season, scoring seven goals in all competitions, but is a key figure for his country.

"I am worried and I'd like him to be playing more. Unfortunately for us, though, he's out of favour with the current coach," Herrera told Fifa.com. "That's the reality and we can't cover it up. It's there for everyone to see. They've had a lot of injuries and suspensions and he still doesn't get a start."

Real Sociedad striker Vela has scored 11 times for his club this season and has nine goals in 35 international appearances but he made himself unavailable for the World Cup because he is not "mentally ready".

"Mexico aren't going to be any weaker because he's not there," Herrera added. "In fact, they're going to be even stronger, because the ones who'll be there will be committed to the cause."

France defender Eric Abidal looks unlikely to head to the World Cup after a disciplinary issue with his club Monaco.

The 34-year-old - available again after recovering from a stomach bug - refused to stay to watch Claudio Ranieri's side face Lille in Ligue 1 after being left out of the squad, going home without permission.

That could mean trouble for Abidal, as Les Bleus coach Didier Deschamps has insisted repeatedly that he does not want any off-pitch dramas among his players this summer.

"It's his problem, I know he was at home. He did not stay for the game," Monaco coach Ranieri said. "He came with us to the pre-game camp and he left. He was not on the bench. He left."