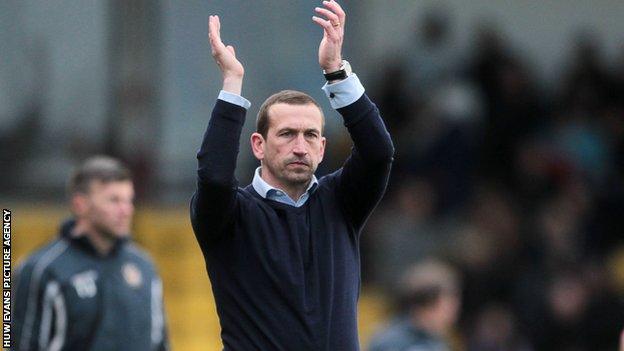 Manager Justin Edinburgh wants his Newport County side to build on their 1-0 win at Torquay United.

Edinburgh hopes the win will give his players confidence ahead of home games against Bury and Portsmouth.

"Confidence can play a major part in football and we'd forgotten how to win games," Edinburgh said.

"But we've got to make sure that we don't waste this win and this clean sheet and make sure we build on it [in our] next two home games."

First and foremost it was a very much needed win, a very good clean sheet and an excellent three points

Newport are 12th in League Two after their win over bottom side Torquay and seven points off the play-offs.

The win also any eases fears Edinburgh had of County being pulled into a relegation battle with County nine points clear of second from bottom Northampton.

"It certainly gives us a bit of distance between ourselves and the bottom two," Edinburgh said.

"If we can get back on it, you never know?

"But I think first and foremost it was a very much needed win, a very good clean sheet and an excellent three points."

Edinburgh was pleased with the performances of debutants Darcy Blake and Kevin Feely at Plainmoor.

Wales defender Blake has joined on a non-contract basis until the end of the season while Feely is on loan from Charlton Athletic.

"They only met each other Friday, with the rest of the team, and had very limited time to work together," Edinburgh said.

Edinburgh said he was unlikely to add further recruits to his squad before the deadline for emergency loan signings closes on Thursday.