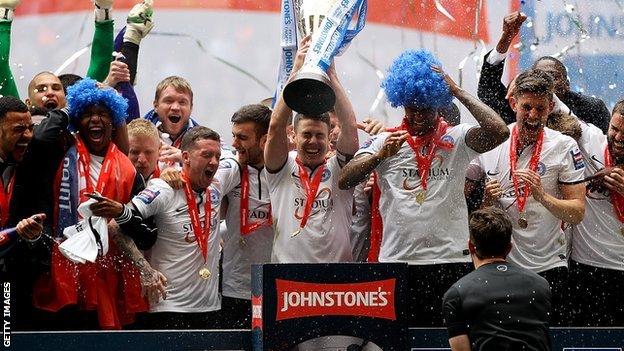 Ten-man Peterborough won their first major piece of silverware with a hard-fought win over Chesterfield in the Johnstone's Paint Trophy final.

Josh McQuoid poked the League One side ahead and Shaun Brisley's powerful header made it 2-0 at the break.

Eoin Doyle pulled one back from close range before Posh midfielder Joe Newell saw red for kicking out at Sam Morsy.

Posh boss Darren Ferguson has now won the trophy as a player and manager after scoring Wrexham's second goal in a 2-0 win over Southend United in 2005.

But Britt Assombalonga's penalty sealed victory after Mark Little was felled in the area by Liam Cooper.

Peterborough boss Darren Ferguson, watched by father Sir Alex, will hope victory boosts his side's faltering push for a place in the play-offs, and with it their hopes of completing a Wembley double.

The goal was doubly harsh on the League Two side, who felt they should have had a penalty moments before when Michael Bostwick looked to have brought down Doyle in the area and were defending the set-piece without skipper Ian Evatt.

Despite the setback, the League Two side had the vast majority of possession and chances before the break, with Morsy and Evatt both guilty of wasting very presentable opportunities.

It was from another set-piece that Paul Cook's men were made to pay for their wastefulness. Full-back Ritchie Humphreys sliced the ball out for a corner and Posh defender Brisley made the most of his second chance with a powerful header beyond Lee.

After Peterborough striker Assombalonga, on the losing side as a Southend player in last year's final, miscued a fine opening 10 yards out, the Spireites finally got the goal their endeavour deserved.

Former Port Vale man Morsy went on a powerful run into the Posh box and his low cross was smartly converted by Doyle from six yards.

Morsy was at the heart of the game's next big moment when he fouled Newell, only for the young Peterborough midfielder to kick out and earn himself a straight red.

Chesterfield pushed on in search of an equalising goal but soon found themselves two behind once more, with Assombalonga confidently slotting home from 12 yards after Little's bright run was ended by Cooper's poor challenge.

That effectively put the game out of reach and Peterborough could have added gloss to the scoreline when substitute Lloyd Isgrove forced a low save from Lee.

Cook's side, who won the competition under John Sheridan in 2012, will now be hoping to avoid the need to return to the national stadium in the play-offs. The Spireites are five points clear of fourth-placed Fleetwood with six games to play.