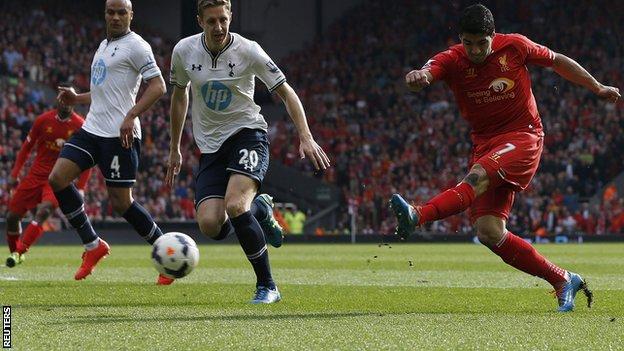 Liverpool moved to the top of the Premier League as they humiliated a woeful Tottenham side at Anfield.

Luis Suarez made it 2-0 after Michael Dawson's error, and the Uruguayan then had a header pushed onto the post.

Results are from this season only

Victory moved the Reds two points ahead of Chelsea and four in front of Manchester City, though Manuel Pellegrini's side have played two games fewer than their title rivals.

However, with both City and Chelsea still to visit Anfield, Brendan Rodgers's team have their destiny in their own hands. Six wins from their last six matches will see them win the league title for the first time since 1989-90.

This game was expected to present a tough challenge, but the hosts - who last topped the table on Boxing Day, before a 2-1 defeat at Manchester City - dominated from the off and should have won by a wider margin.

As well as underlining the Reds' place at the heart of the title fight, the match also served as another reality check for a Tottenham side that face a battle to hang on to sixth place and Europa League qualification.

The Londoners remain well short of the quality needed for a Champions League spot, and have only taken one point from eight league games against the top four this season.

Liverpool were always comfortable in front of a noisy and passionate Anfield crowd, who only had to wait two minutes before they were celebrating a goal.

Fifty years ago - on 30 March, 1964 - Liverpool beat Spurs 3-1 at Anfield to go top of the First Division. They went on to win the league by four points

An excellent diagonal ball from Coutinho found Raheem Sterling, who released the overlapping Johnson. The England right-back pulled the ball across the six-yard box and, after going through Jan Vertonghen's legs, it bounced off Kaboul's heel into his own net.

Suarez's cross was then narrowly missed by Daniel Sturridge and Coutinho fired just wide as the hosts pushed for a second goal.

It came after 25 minutes when Dawson, who had just replaced the injured Vertonghen, gifted the ball to Suarez and he arrowed a low shot past Spurs goalkeeper Hugo Lloris for his 29th goal of the season.

Spurs had fought back from 2-0 down to beat Southampton 3-2 last Sunday, but a repeat never looked likely and Coutinho confirmed the victory with a powerful low shot from outside the area for Liverpool's third.

A miserable day for Tottenham got worse when Henderson's low free-kick went through a crowded penalty area and into the far corner of the net to seal a convincing win.

"The idea was to stay in the game as long as we could but at 2-0 the game is dead and buried.

"It does appear we have a problem against the top four. The statistics don't lie. We have to address it. To go where we need to go, we need to get points from those above us."

On remaining in the stand for the entire game: "I'm going to learn more about my players from up there. When the team is not doing well, the fans want to see me.

"I am not shirking responsibility. But at 3-0, it was time to take step back and assess because our performances against the top four have not been good enough."