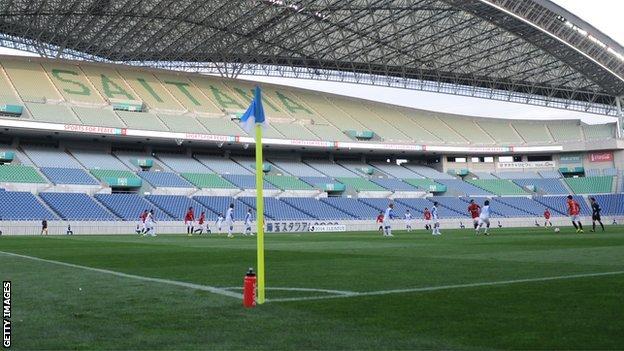 Japan's best-supported club Urawa Red Diamonds played in an empty stadium on Sunday after fans were banned for racist behaviour.

The J-League match with Shimizu S-Pulse was watched by just a handful of journalists and security staff in Urawa's 63,000-seat Saitama Stadium.

The one-game ban was punishment for a "Japanese only" banner put up by fans before the last home game on 8 March.

The club's captain, Japan international Yuki Abe, also read a statement regretting the racist banner, which was written in English and hung over the stadium entrance.

The statement said: "Urawa Reds, as a member of the football family, pledge to fully abide by Fifa's vow to stamp out racism, be it discrimination against race, skin colour, gender, language or religion or background, and will not tolerate any discriminatory or insulting language or behaviour."

It is the first time in the 20-year history of the J-League that a match has been played at a stadium closed to fans.

J-League chairman Mitsuru Murai said the banner had "damaged the brand of not just the J-League, but of the entire Japanese football community."

Urawa Reds, who were held to a 1-1 draw by Shimizu, have an average home crowd of more than 37,000 for J-League matches.

The Russian club was charged after Toure complained about the chanting during City's 2-1 Champions League win on 23 October.