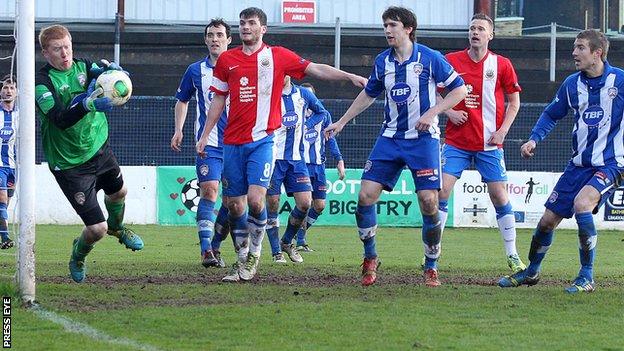 The Blues stayed two points clear of champions Cliftonville at the top on Saturday as both sides drew.

The title challengers go head-to-head at Windsor Park on Saturday but Jeffrey insists the match will not be decisive.

"It will go down to the wire I would have thought and that is absolutely brilliant. I cannot wait," he said.

This time last season Linfield were in third place and a massive 21 points behind runaway leaders Cliftonville.

Now they are leading the table going into the five post-split fixtures against the other top six teams in the Premiership.

On Saturday the Blues drew 0-0 away to Coleraine while Cliftonville also had a goal-less draw in their match at Glentoran.

"We were miles behind last season, it was horrible," said Jeffrey.

"That was because that particular group of players were coming to the end of their time.

"We have commenced the rebuilding process and in my view we are ahead of schedule when you look at what we have achieved so far.

"We wanted to be back challenging realistically and we have done that well.

"Cliftonville have a mature and talented squad, which they have been building for several years, similar to ourselves when we went on a run of winning trophies.

"They are in a very strong position, but next week's match will decide nothing."