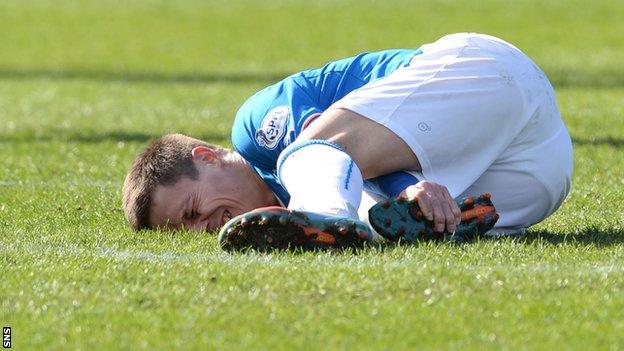 Rangers hope to find out the fitness of Ian Black and Nicky Law in the next 48 hours after both were injured in the 2-1 win over Brechin City at Glebe Park.

Goals from Fraser Aird and Nicky Clark moved the Ibrox men 32 points clear in the Scottish League One table.

With the Ramsdens Cup final two weeks away, followed by the Scottish Cup semi-final, manager Ally McCoist is sweating on the pair being available.

"At this moment in time, they are both toiling," he told the Rangers website.

Law lasted only 26 minutes before he went off holding his hip then, on the hour mark, Black was carried off on a stretcher after he kicked the boot of Graham Hay as the defender attempted to block.

"We won't really know how they are for another 24 to 48 hours," said McCoist.

"Blackie's got a sore one. He went to strike the ball, the lad went to block him and I think everyone in the crowd heard it.

"It looked and sounded like a sore one, so he'll ice it just now and we'll reassess that one on Monday.

"Nicky is the same. He just felt he twisted his back a bit on a run through in the first half and we weren't taking any chances, so we took him off."

Rangers led through Aird's first-half strike when he took advantage of an error by Jonny Brown.

Robert Thomson equalised just after half-time, the first away goal Rangers had conceded in five months.

It is difficult for Rangers coming to places like this and raising their game week-in, week-out. But they will need to raise their game against Dundee United

Clark turned the game back in Rangers' favour when he made an instant impact after replacing Black; heading in Jon Daly's cross at the back post.

"The goal itself was a poor one to lose," said McCoist of the equaliser. "Richard Foster could have cleared it earlier then Calum Gallagher, or certainly somebody, could have gone to stop the cross.

"It's disappointing and we wanted the run to go on as long as it possibly could, but I think it's a fantastic achievement for all the boys.

"To have gone so long without losing a goal away from home was great and we've been delighted with that. We congratulate them on it."

Brechin City manager Ray McKinnon believes Rangers will need to play much better if they are to knock his old club, Dundee United, out of the Scottish Cup.

"If they play like that today, they will get beat, no doubt about it, because Dundee United are a really decent side going forward," said the former Tannadice midfielder.

"They are young, energetic and they have goalscorers in their team.

"If Rangers are not switched on then it could be very difficult for them. But they have a chance, they have a good team and, if they raise their game, it will be a good semi-final."