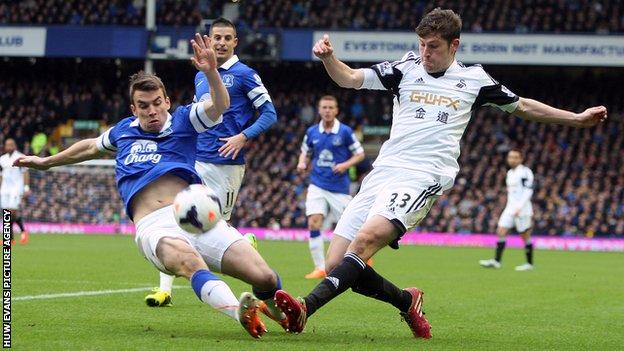 Defender Ben Davies says it is vital Swansea City remain positive despite a run of eight games without a win.

The Swans are 15th in the Premier League, just four points above the relegation zone, after the 3-2 defeat at Everton.

They travel to Arsenal on Tuesday with eight games of the season remaining.

"That's one thing we can't afford to let slip is our confidence," said Wales international Davies.

"We can't afford to slip into negative ways and everybody feeling sorry for themselves because then we don't have any chance of winning games.

"It's important we keep that confidence up and play the way we know we can and we'll create chances and hopefully get goals to win games."

Davies' fellow defender Angel Rangel believes their Europa League campaign has had a detrimental effect on the Swans' league efforts.

Davies shared his manager's frustration especially as Michu and Pablo Hernandez went close for the visitors.

"We've got to learn to deal with those spells because every team's going to get them in games," Davies.

"It's always difficult when you're two goals down, especially at a team like Everton.

"We gave it a good shot. If we take our chances when we get them, we get back in the game.

"The chances we get we've got to learn to put them away before it's too late.

"It was too late to get back in the game then."

After facing Arsenal, Swansea host Norwich City next Saturday, having never beaten the Canaries in the top flight.

"We definitely need something out of the next two games," Davies said.

"We've got to go there [Arsenal] looking to get something out of the game."