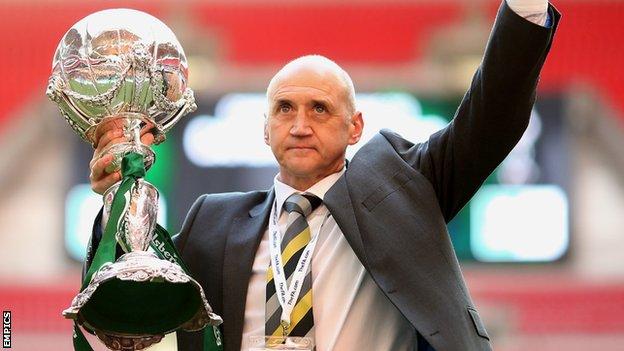 Cambridge United manager Richard Money hopes Sunday's FA Trophy final victory can be a springboard in their bid to return to the Football League.

United defeated Gosport Borough 4-0 at Wembley to win the competition for the first time in their history.

Money's side are second in the Conference Premier and he hopes the victory can boost their promotion bid.

"We will only know in May if this will act as a springboard but we certainly hope it will," Money told BBC Sport.

Winning the FA Trophy ends a 45-year wait for a victory in a cup competition for Cambridge United.

"Every experience can only be good. We have to feed off this experience and grow from here."

With leaders Luton 14 points clear at the top, the play-offs look United's best hope of ending their nine-year spell in the Conference Premier.

Money said the experience of playing at Wembley on Sunday could stand them in good stead, should they end up there again.

"We know there is a lot of work to do," he said. "We do not think the play-off place is secured and know there is still a lot of hard work to do and want to get in there as quickly as we can.

"If we can get in there and go there then this will only help."

Former Hatters boss Money also paid tribute to two-goal hero Ryan Donaldson and revealed a penalty miss at Forest Green earlier in the month was the reason why Luke Berry took a late spot-kick and denied the forward the chance to grab a hat-trick.

Cambridge's manager, who called the victory one of the best achievements of his career, also praised his side for coping with the occasion and their tag as favourites.

Gosport and Cambridge United have Steve Claridge in common.

The former Birmingham, Leicester and Portsmouth striker finished his career at Gosport in 2012, after two spells with the U's in the early 1990s

"Hopefully Ryan's performance will be the yardstick for all of them and be a role model for the other players to play as well as he has done today," he said.

"When you come into occasions like this you just want your team to turn up and perform and they did.

"We knew we were favourites, sometimes you can talk yourself out of that and I'm pleased we played like that."

And like his counterpart Money, Pike hopes the experience of playing at Wembley, as well as their run in the competition, can have a positive impact on the rest of their season.

"It's sheer disappointment," Pike told BBC Sport. "We've just been given a footballing lesson by Cambridge and it's not an easy pill to swallow.

"Having said that they are aspiring to be in the Football League and Gosport are trying to get where Cambridge are now. That sums up the difference in class.

"The best place to lose it is Wembley, it's given us a revenue stream that we did not expect and will secure us for two to three years and it is something to build on."

Pike, whose side are third bottom in the Conference South (20th), added: "We had a fantastic team spirit before the final and it's up to me to galvanise them now and take that forward to the league campaign and get us out of the trouble we are in in Conference South.

"It's taken us eight years to get to where we are now and I'm not going to give it up lightly.

"We will build on this experience. I felt we could win and on another day we could have done. We will see where it takes us."