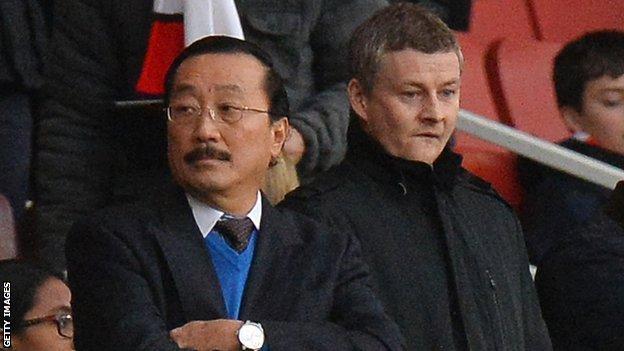 Lee Sharpe expects Cardiff City to be relegated from the Premier League, but to return immediately under manager Ole Gunnar Solskjaer.

"It's looking a little bit sad for Cardiff now that they're going to go down," Sharpe told BBC Radio Wales.

"But if they can give him [Solskjaer] a couple of quid in the summer I think he'll get them straight back up next year and have them playing better and be stronger for it."

Sharpe and Solskjaer did not play together at Old Trafford, Sharpe leaving for Leeds United in the summer of 1996 when Solskjaer arrived from Molde.

Solskjaer won't have gone in there thinking, 'if I don't keep them up I'm going to lose my job'. He'll be thinking long-term

But given Solskjaer's playing background and experience, Sharpe believes it gave a clear indication that the Norwegian would pursue a life in management after his playing career.

"Ole came into the club just as I was leaving, really," said Sharpe. "But Ole was a studier of football.

"He came off the bench a lot of times and scored because he'd understood the way the game was going.

"I suppose the natural progression for him would be a manager. He's very much a football man.

"He eats, breathes and sleeps football."

After Saturday's 6-3 defeat by Liverpool at Cardiff City Stadium, Solskjaer said they must win at fellow strugglers West Bromwich Albion next weekend.

Cardiff are second from bottom on 25 points, with West Brom three points and three places above them.

After West Brom, Cardiff face another team with relegation worries in Crystal Palace.

Some Bluebirds fans continued their protest over the club's colour rebrand from blue to red ahead of the Liverpool game under owner Vincent Tan.

Wealthy Malaysian businessman Tan has come in for criticism over the rebrand.

He also sacked Solskjaer's predecessor Malky Mackay in December, later alleging Mackay had been part of a player-budget overspend.

Sharpe says that recent history has made life tough for Solskjaer on his arrival from Norwegian club Molde, but if Cardiff have sense they will stick with their manager even if they are relegated.

"He [Solskjaer] won't have gone in there thinking, 'if I don't keep them up I'm going to lose my job'. He'll be thinking long term.

"They've got a parachute payment next year [if Cardiff are relegated from the Premier League].

"If they can get a couple of players and he can get them playing the way he wants to and his philosophy on football, then I think they should be okay."