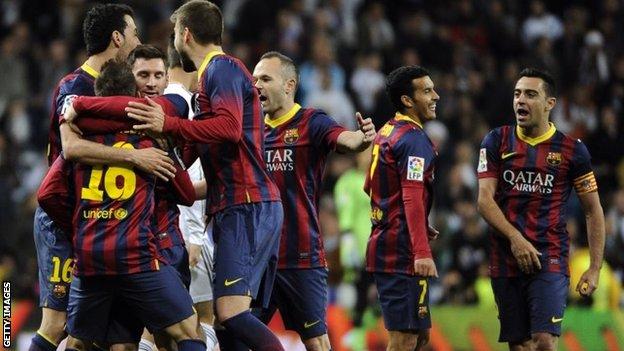 Lionel Messi scored a hat-trick to become the all-time top scorer in Clasicos, and the second-top scorer in La Liga history, as Barcelona beat Real Madrid 4-3.

The victory took Barcelona to within a point of leaders Atletico and Real Madrid.

But what did we learn from the game?

Barca could win everything… because of Messi

Don't be fooled by the result: this was not an especially good team (emphasis on 'team') performance from Barcelona.

They were defensively suspect, they didn't dominate possession until Real were reduced to 10 men and their attacking play came in sporadic bursts, largely relying on individual inspiration rather than carefully crafted teamwork.

However, they do possess an intense will to win and one player whose game-changing abilities are unrivalled. Lionel Messi was magnificent, not just for his goals and his assist to Andres Iniesta, but for his uncanny ability to create space by drifting between the opposition's defence and midfield.

Despite their erratic season, Barca are still fighting for three trophies: La Liga, the Champions League and the Copa del Rey. With Messi - and only with Messi - they could win all three.

Real Madrid looked like an unstoppable machine as they rolled into the game on the back of a 31-game unbeaten run, but their defensive deficiencies were exposed as Messi and Iniesta preyed upon their formational inflexibility and their consequent difficulties in closing space 'between the lines' of defence and midfield.

Neither Sergio Ramos nor Pepe are comfortable if they are dragged out from their accustomed centre-back positions, while Xabi Alonso lacks the mobility to fully cover the area in front of his back four.

The conclusion is that if you attack Real with a conventional striker and wingers, they are comfortable; but if you have players with the spatial intelligence of Messi and Iniesta, it's a different story.

Ronaldo can be subdued

Barca's greatest defensive achievement in this game - although it arguably left them vulnerable in other areas (notably containing Angel Di Maria) - was their ability to do something few teams have managed this season: keep Cristiano Ronaldo in check.

By asking the freakishly energetic Dani Alves to check his attacking instincts and stepping up to squeeze the space whenever Ronaldo attempted to cut inside, they reduced the Portuguese star to only one significant contribution - winning and scoring a penalty after a foul by Alves, which actually took place outside the box.

Other teams can learn from Barca's approach by making Ronaldo go around the outside rather than giving him any opportunity to attack through the middle. Even so, he was still nearly the matchwinner.

Bale and Neymar aren't quite there

Gareth Bale and Neymar were world football's biggest two signings last summer, arriving in Spain to a great fanfare and with enormous expectations.

Although neither of them have flopped, they haven't set La Liga alight - and they certainly didn't justify their price tags on Sunday night.

Bale played well for Real in flashes, producing a limited number of forceful and aggressive attacking bursts. But there was little end product in terms of shots or crosses, and he was very quiet in the closing stages.

Barcelona's Neymar, meanwhile, has been badly affected by the dual combination of injury problems and the furore surrounding his contract, and in Sunday's inhibited display he appeared to be carrying the weight of the world on his slender shoulders.

Barca's victory got them right back into the thick of the La Liga title race, leaving them just one point behind vanquished Real.

But both of them are behind Atletico Madrid, who won earlier in the day against Real Betis while nobody was really paying any attention and now sit on top of the pile thanks to their superior head-to-head record against their more glamorous neighbours - goal difference is only a secondary tie-breaker in La Liga.

Atletico have the toughest run-in of all three contenders but if they win all nine remaining games, they will be champions. And the last of those? Away to Barcelona.

Hold onto your hats.