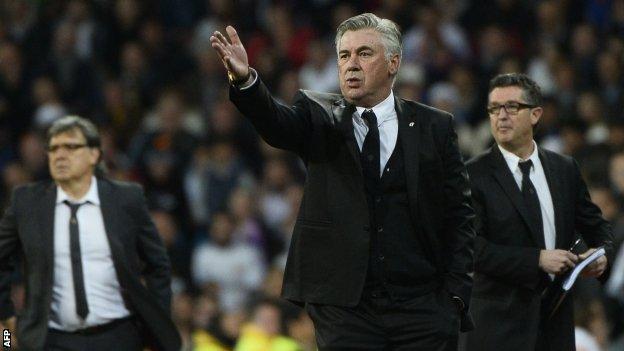 Barca's thrilling 4-3 win moved them to within a point of leaders Atletico Madrid and second-placed Real.

"In the first matches with Barca and Atletico we deserved to lose, but not tonight. We didn't deserve this defeat," he said.

"The team has showed its quality and proved it in this match."

Atletico are level on points with city rivals Real but top La Liga because of their better head-to-head record, after a draw and a win against Ancelotti's men this season.

No team other than Real or Barca have won the title in Spain since Valencia were champions 10 years ago.

"I've said it many times - the league will be decided in the last match. We have to continue fighting. We need to react," said Ancelotti.

"The league race is still open. We need an immediate reaction. We have nine matches left. It will be all intense. Every game will be decisive.

"We committed small mistakes and that's why we lost. It's true that Lionel Messi scored three goals, but any mistakes against a player of his quality will always hurt you."

In a match which swung one way then the other, two second-half penalties from Messi secured victory for the visitors.

Real players protested at both penalty decisions - for fouls on Neymar and Andres Iniesta - but Ancelotti said: "It's difficult for me to comment on the referee's decisions."