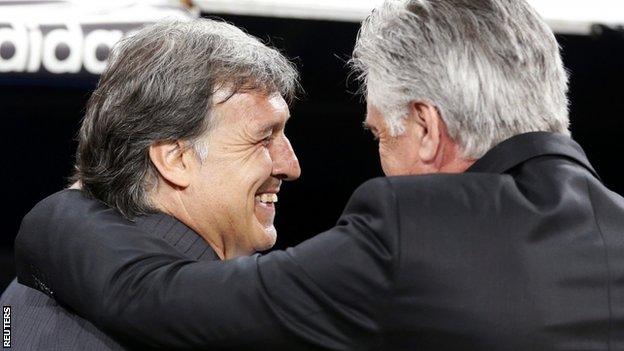 Barcelona coach Gerardo Martino says La Liga "has started over" after his side reignited their title hopes with a thrilling 4-3 win at Real Madrid.

Inspired by Lionel Messi's hat-trick, Barcelona moved to within a point of leaders Atletico Madrid and second-placed Real Madrid.

"La Liga has started over. We're back in the fight for the title," Martino said.

"I always believed all three teams would be in the fight at the end."

A Real Madrid win on Sunday would have seen Barca fall seven points off the top of the table.

But their win means the top three are separated by only a point, with Atletico Madrid top because of their superior head-to-head record against Real.

Martino added: "Today was our last chance. We didn't want to be left out of the fight."

Messi's hat-trick saw him move up to second in the all-time La Liga goalscorers list, with 236 goals.

"He's put in many performances like the one he put in today, but the impact is greater in a Clasico. I really have run out of words for him," Martino said.

"The players are the big protagonists; this game wasn't going to change my perception of my players."