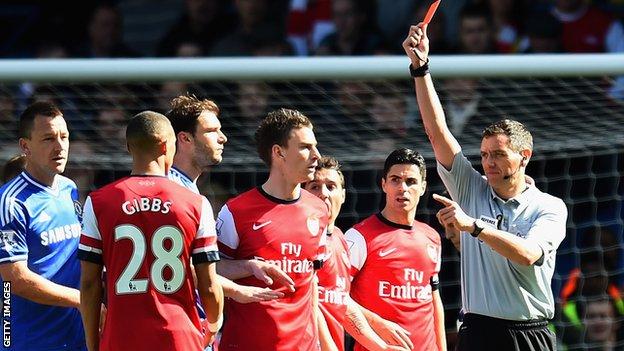 Arsenal have succeeded in ensuring that neither Kieran Gibbs nor Alex Oxlade-Chamberlain will be suspended following Saturday's red-card blunder at Chelsea.

Referee Andre Marriner sent off Gibbs instead of Oxlade-Chamberlain, who had handled a shot from Eden Hazard.

The Football Association transferred the red card to Oxlade-Chamberlain, but the Gunners successfully argued he had not stopped a goalscoring chance given Hazard's shot was going wide.

The 43-year-old official, who apologised for mixing up the identities of the players, will take charge of Southampton's home game with Newcastle on Saturday.

Professional Game Match Officials Limited, the body responsible for training referees, decided he should be given the chance to get over his mistake immediately, rather than being stood down for the weekend.

All four officials involved at Stamford Bridge will be in action this weekend.

Rules drawn up by world governing body Fifa state a player should only be shown a red card for handball if "the unacceptable and unfair intervention prevented a goal being scored".

The rules make no mention of a player's intent when handling the ball.

It added: "While this was a difficult decision, Andre is disappointed that he failed to identify the correct player. He expressed his disappointment to Arsenal when he was made aware of the issue."

He tweeted: "With an additional assistant referee on the end line, referee would not have got that sending off wrong. Technology is not the answer. More eyeballs are the answer."

Arsenal were trailing 2-0 at Stamford Bridge when defender Gibbs was mistakenly shown a red card.

The defeat dropped the Gunners to fourth place in the Premier League, seven points behind leaders Chelsea but with a game in hand.