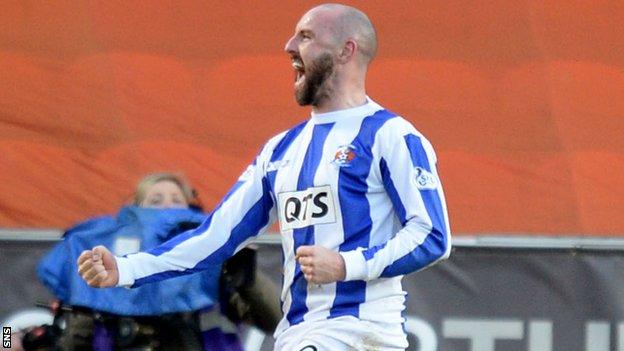 Kris Boyd has refused to rule out a return to Rangers after the Ibrox club's manager revealed he wanted to sign the Kilmarnock striker.

Boyd was a television pundit for Rangers' 2-1 win over Brechin City.

Asked if he was going to sign the striker beside him this summer, Ally McCoist replied: "I hope so."

Boyd later told BBC Scotland: "I grew up a Rangers fan. But, right now, I don't know what will happen in the future."

I'm enjoying my football, scoring goals, playing every week and the most important thing for me right now is to keep getting goals for Kilmarnock

The 30-year-old scored his 19th goal of the season in Kilmarnock's defeat by Aberdeen on Saturday and his form - despite his club's struggles in the lower half of the Scottish Premiership - led to a recall to the Scotland squad.

Boyd is out of contract in the summer and, although he insists he has no concrete offers at present, he said: "I always want to test myself against the best. I want to get myself to a higher level.

"I can't sit here and say I'm going to be at Kilmarnock forever and I can't say I'm not going to be, because I've learned in football that anything can happen.

"When I left Rangers the fist time, I felt I wanted to have a different challenge.

"It's not worked out that way. I found myself going here, there and everywhere.

"I'm settled and I've loved every minute of being back at Kilmarnock."

Ayrshire-born Boyd began his career with Kilmarnock and his goals for his local club and Rangers led him to become the highest scorer in Scottish Premier League history.

He had a less prolific spell with Middlesbrough, who loaned him to Nottingham Forest before he left the UK for an ill-fated time in the Turkish top flight with Eskisehirspor.

His next move was to the United States with Major Soccer League outfit Portland Timbers before a return to Kilmarnock in February 2013.

"I've always said I was grateful to Kilmarnock for giving me the chance to come back because I hadn't played in a long time," said Boyd.

"I had found myself in and out of teams for the last couple of years and to get back playing regular football was great.

"You're always linked with teams, but I think that's always going to be the case when you're a goalscorer and scoring goals.

"That's been the case in every transfer window for the last six or seven years, but it is something you relish because it shows you are doing your job properly."

However, Boyd stressed that his focus was on helping Kilmarnock, who are eighth and only three points above St Mirren in the relegation play-off spot, rather than on rejoining League One champions Rangers.

"I'm enjoying my football, scoring goals, playing every week and the most important thing for me right now is to keep getting goals for Kilmarnock," said Boyd.

"I don't want to score 20-odd goals and end up getting relegated."