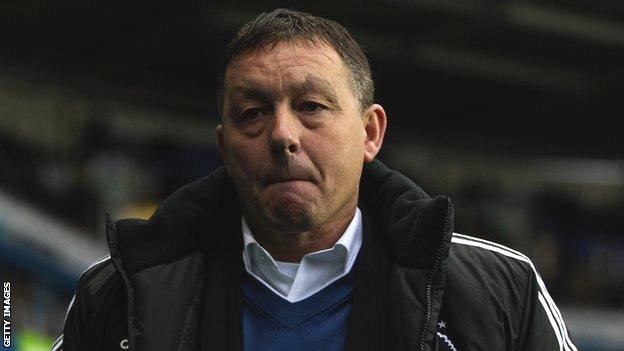 Nottingham Forest have sacked manager Billy Davies but say they will not be making a quick decision about the Scot's replacement.

Forest have been in talks with Neil Warnock and were expected to announce the former Leeds United boss as their new manager on Monday afternoon.

Warnock, 65, is still in the frame and his former captain at Leeds, Lee Peltier, has been signed by the Reds.

But Forest owner Fawaz Al Hasawi said he must "stress the need for patience".

Academy manager Gary Brazil will be in charge for Tuesday's Championship game against Charlton.

Al Hasawi, who has lifted all bans on media at the club, said in a statement on the Forest website: "I am aware many people expect me to announce a new manager imminently, however I must stress the need for patience as I make the important decision of who takes the reins at this crucial stage of the season.

"I will keep our supporters informed of any developments, but in the meantime I ask everyone to get behind our academy manager Gary Brazil until a permanent appointment is made."

Davies, 49, was appointed Reds boss for a second time in February 2013, but was fired in the wake of Saturday's 5-0 defeat against rivals Derby County.

The result left Forest a place and two points outside the Championship play-offs after an eight-game winless run.

Warnock has been out of work since leaving Leeds in April 2013.

Davies and his staff did not turn up for training at the Championship club on Monday, fuelling speculation that the Scot had been fired overnight and would be replaced by Warnock, who met with Forest's owners on Sunday.

Davies only signed a four-year contract extension at the City Ground in October 2013, eight months after re-joining the club.

Forest narrowly missed out on the Championship play-offs last term and have not finished in the top six since 2011, during Davies's first spell at the club.

He was first hired as Forest manager in December 2008 and twice led them to the play-offs, only to miss out on promotion to the Premier League by losing in the semi-finals on both occasions.

Davies was sacked in June 2011 and replaced by Steve McClaren.

McClaren, the former Middlesbrough and England manager, is now in charge at Derby and masterminded the 5-0 win over Forest at the weekend.

Forest have not won in the league in the seven games since they beat Huddersfield on 11 February, and were also knocked out of the FA Cup by League One side Sheffield United.

You can have your say on the managerial situation at Nottingham Forest on BBC Radio Nottingham's football phone-in Matchtalk from 18:00-19:00 GMT on Monday.