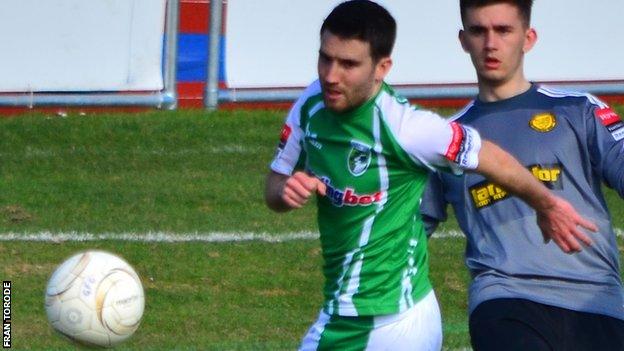 Guernsey FC boss Tony Vance says he is proud of his players despite their 2-0 loss at Ryman League Division One South leaders Peacehaven.

Ross Allen missed a penalty after the hosts had taken a 47th-minute lead.

Guernsey's Angus McKay was then sent off as he conceded an 89th-minute penalty, which the hosts converted to go 15 points ahead of the Green Lions.

"I was really, really proud of the performance and the way the boys kept pushing," Vance told BBC Guernsey.

Third-placed Guernsey now look set for a play-off place as they chase promotion to the top flight of Ryman League Premier Division.

"We did more than enough to win the game and we were the best side, but the result shows a 2-0 victory to them," Vance said.

"Credit to them, they put the ball away and we didn't, they had the rub of the green in front of goal.

"We deserved something but we didn't get it and we've got to move on quickly."

And Vance felt that had top scorer Allen converted his penalty, his side would have gone on to inflict a fourth defeat of the season on Peacehaven.

"It was a game changer, if that had gone in we'd have probably gone on and won the game, of that I have no doubt.

"Ross apologised to me after the game but I'm not having that, no way, it was a good save.

"That didn't cost us the game, we had umpteen chances and lots of pressure but we couldn't break them down and you've got to give them credit for that."