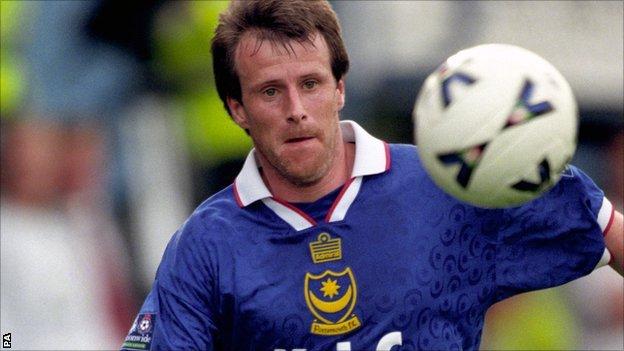 Former Portsmouth striker Steve Claridge fears the League Two club could be relegated if things do not change at Fratton Park.

Pompey are three points above the relegation places with eight games left and have only won two of their last 10 games, losing four of those.

"I don't want to think about relegation or even consider it," Claridge told BBC Radio Solent.

"On current form and the way they are playing, they are in real problems."

Richie Barker's side travel to leaders Rochdale on Tuesday and Claridge, who made over 100 appearances for Pompey, believes replacing Guy Whittingham with the former Bury and Crawley manager has not gone as planned.

"Statistics alone show it just has not worked," he added.

"I don't think it is just the position they find themselves in. I think it is the manner in which they have got themselves there. It hasn't brought great joy to anybody and it's been hard work to watch let's be honest.

"At times they are going through games with one or no shots on target and there is a negative feel about the place and the whole way the club is going about trying to stay up.

"It feels too negative at games. They seemed more worried about the opposition then doing what they are good at. It's been difficult. watching them play and the manner and style has been hard to take."

Barker took over on 9 December following Whittingham's dismissal but has won just four games from 19 and is coming under pressure from supporters at Fratton Park.

However, Claridge believes a change of manager at this late stage would not be beneficial.

"What we can't do is blame predecessors and what has gone on in the past," he said.

"At some stage someone has got to take responsibility and change the mentality and make this a club that believe in what it is doing.

"I just want to see more belief and maybe more direction in what we are trying to achieve. I think the players are confused as to what is wanted from them from the manager. I am very worried.

"It is wrong to say he can't win people over but he is only going to do that if he does things differently."

Meanwhile, Michael Drennan's loan from Aston Villa has been extended until the end of the season.

The 20-year-old Aston Villa striker has made five appearances since arriving at Fratton Park last month.

He scored on his debut in a defeat at Scunthorpe and started the home victory over Accrington.