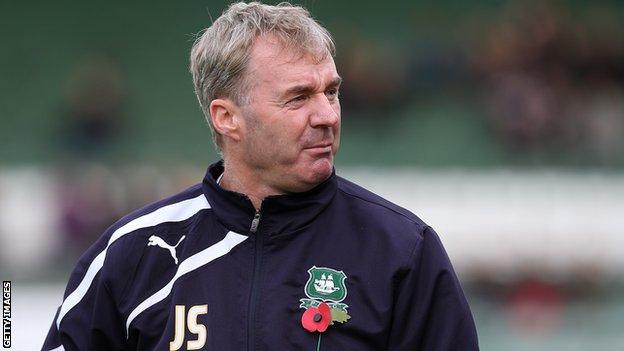 Plymouth Argyle manager John Sheridan says he is angry at the way his side gave away the lead in their 1-1 draw at Accrington Stanley.

Tom Aldred claimed a point for the home side with less than 10 minutes left.

"This is probably the angriest I've been all season. The game was definitely there to be taken and once you get a goal up just see the game through," he told BBC Radio Devon.

"So many times we put ourselves under pressure it was unbelievable."

Sheridan, whose side are eighth in League Two and are level on points with York, who occupy the final play-off spot, was particularly critical of the way his side conceded the goal.

"The goal was a joke," he said. "I can see it happening and I'm 80 yards away, so why does someone stand off him by 15 yards? It does my head in at times.

"We've got no leader on the pitch because [Paul] Wotton isn't playing," added Sheridan, who criticised his players for their lack of communication.

"This was a great opportunity for getting three points and winning the game and getting ourselves in a healthy position.

"A middle of the table or relegation team do things like that, Scunthorpe or Chesterfield wouldn't have done that and that's the difference between them and us."