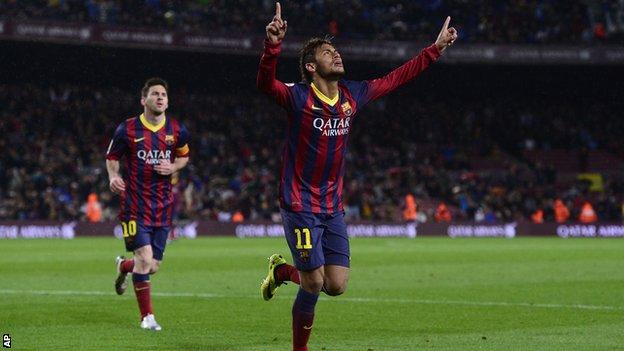 Neymar scored twice as Barcelona recorded a comfortable victory over Celta Vigo to remain firmly in the hunt for the La Liga title.

The Brazilian opened the scoring early on with a close-range finish from Alexis Sanchez's cross.

Neymar wrapped up the win in the second half, collecting a long Sanchez ball and finishing with a low shot.

The win moved Barcelona top of the standings with 72 points, although that could change with and in action later on Wednesday. They play Sevilla and Granada respectively.

Barcelona brought themselves right back into the title race when they beat Real Madrid 4-3 in a thrilling Clasico on Sunday and were determined to build on that as they attacked Celta Vigo from the outset.

No sooner had the game kicked off and Messi had the ball in the net, but was flagged offside.

Barcelona's opener arrived minutes later, as Messi cut open the defence with a pass to send Sanchez clear and the forward in turn played a square ball for Neymar, who tapped in from close range.

The trio were causing all sorts of problems and at one stage all three ran clear but Messi uncharacteristically played a pass that left Neymar with too much to do and the Brazilian shot into the side netting.

Celta had won three of their previous four away games in La Liga and, to their credit, they did not set themselves up solely to nullify Barcelona at the Nou Camp.

They thought they had been awarded a penalty midway through the first half when Adriano handled the ball. The referee had appeared to point towards the penalty spot but then awarded a free kick, which Fabian Orellana curled towards goal but Valdes saved at the second attempt.

However, that save came at a price as the Spain goalkeeper and had to be substituted, with 38-year-old Jose Manuel Pinto taking his place.

Barcelona responded to that setback by swiftly adding a second as Andres Iniesta played a perfect defence-splitting pace that sent Messi clear to slot calmly into the corner of the net.

The home side were dominant in possession but on the few occasions Celta managed to break into the Barcelona final third, their attacking play was quick and incisive.

Only a superb double save from Pinto prevented them from pulling a goal back early in the second half when he denied Augusto Fernandez, before getting on his feet quickly to prevent Santiago Mina from scoring with the follow up.

Instead, it was Barcelona who put the game beyond the visitors with just over 20 minutes remaining as Sanchez played a cross-field pass for Neymar, who raced down on goal and, despite the attention of two defenders, squeezed a shot into the net.