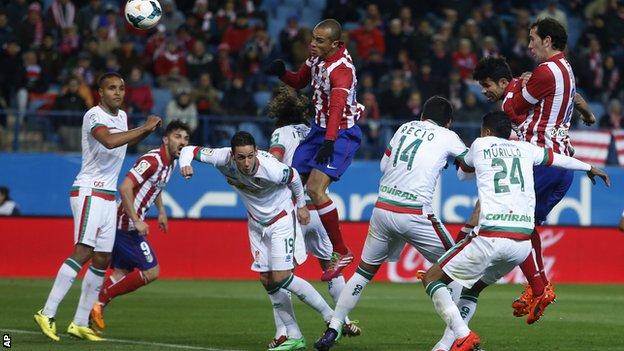 Atletico Madrid kept themselves on course for a first La Liga title since 1996, remaining top of the table with victory against Granada.

Spain striker Diego Costa headed in the game's only goal midway through the second half as Atletico won for the fourth successive game.

Atletico are top with 73 points, one ahead of Barcelona who

Real Madrid suffered a surprise meaning they are third in the standings, three points behind their city rivals.

With Real losing for the second successive game, Atletico's belief that they can claim a first league title in almost two decades will be growing.

Following years of Barcelona and Real dominance, Atletico have shown little sign of faltering in their challenge to redress the balance with just eight games remaining.

They have lost just twice in the league all year and that record looked unlikely to be troubled by Granada.

Atletico had the better chances throughout and were the first to threaten when Villa's inventive flick was blocked, before Arda Turan hit the side netting from the rebound.

The longer the game went without a goal, the more Granada grew in confidence. Youssef El-Arabi twice threatened to snatch a surprise lead as he first shot wide and then fired straight at Atletico keeper Thibaut Courtois before the break.

The second half, though, belonged to Atletico. Villa had a header saved and Gabi smashed a fierce effort wide before Costa broke the deadlock just after the hour.

After Atletico had earned their 10th corner of the game, Costa headed in for his 24th league goal of the season.

Nyom had a chance to grab an equaliser in stoppage time but his looped effort was held by Courtois and Atletico took the points.