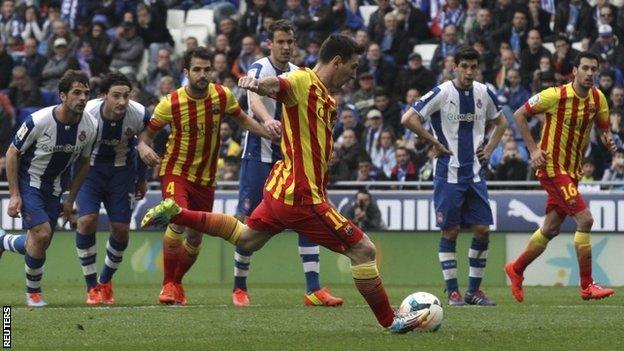 "Barcelona were given a distinctly uncomfortable afternoon by their local neighbours, and the outcome could have been very different if Espanyol striker Pizzi had shown more composure with one of his two excellent first-half chances.

"Messi was largely well shackled but - for the second consecutive weekend - he showed great composure to slot home the winning penalty.

"It wasn't pretty, but Barca have overcome a major obstacle in the title race."

Argentina international Messi scored his 36th goal of the season after Javi Lopez had handled the ball inside the area.

Espanyol keeper Kiko Casilla was sent off with seven minutes remaining when he used his hands outside the box.

Lopez took the gloves because the home side had already used their three substitutes.

Messi and fellow forward Neymar were inches from giving Gerardo Martino's side the lead in the first half, while at the other end Luis Miguel Afonso Fernandes, aka Pizzi, wasted two great opportunities.

Barcelona's only other clear chance at the Cornella-El Prat stadium, aside from the goal, was a volley from defender Gerard Pique that came back off the post.

"Derbies are always tough, and this was a tense game with lots of interruptions, fouls, and controversy," said Barcelona midfielder Sergio Busquets.

"Three weeks ago we were in a difficult situation. Now we are in a privileged one."