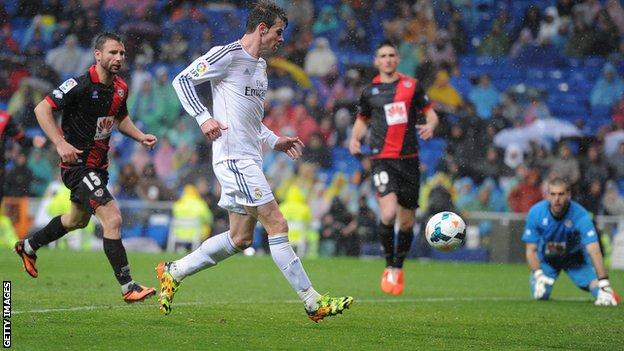 Cristiano Ronaldo opened the scoring with a cool finish from Bale's pass for his 44th goal of the season.

The former Spurs player scored a fine solo effort soon after, before Alvaro Morata curled in a stunning fifth.

It was the perfect response from Real after losing lost 4-3 to Barcelona last weekend and 2-1 to Sevilla on Wednesday.

Carlo Ancelotti's side move onto 73 points but remain third, two points behind Barcelona and three adrift of leaders Atletico Madrid.

Perhaps conscious of the fact their title rivals had both won earlier on Saturday, Real started at a high tempo as they looked to grab an early goal.

And given Real's blistering start, it was little surprise when they took the lead with 15 minutes on the clock.

Ronaldo sliced through the Vallecano defence to latch onto a Bale through-ball and the Portuguese forward placed a low shot beyond Ruben.

The visitors were struggling to make a telling impact and had only once chance of note before the interval, with Jose Carlos flashing an effort well wide.

And any hope they had of mustering a fightback in the second half was ended when Bale scored twice in quick succession.

His first was a simple tap-in following Angel Di Maria's cross, but his second was one of real quality as he sprinted towards the Vallecano box from his own area and beat a defender before rifling home a low shot beyond Ruben.

Though victory was assured, Real continued to attack as they looked to add gloss to an already dominant scoreline.

Ronaldo looked certain to score again when he raced into the area but took one touch too many, allowing the visitors to clear.

A fifth duly arrived, though, when Morata found space on the edge of the area and curled a superb shot into the far corner.