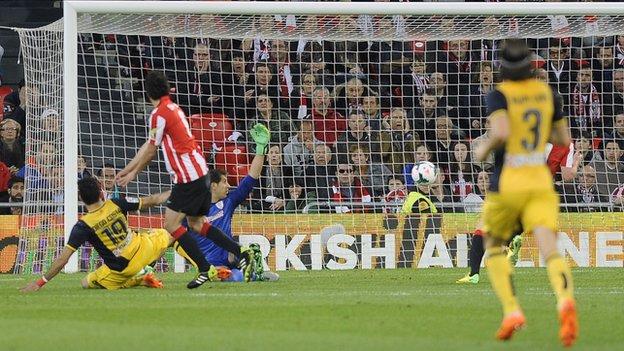 Atletico Madrid maintained their charge for a first La Liga title since 1996 as they came from behind to win at Athletic Bilbao.

Iker Muniain put the home side ahead inside the opening 10 minutes with a lobbed finish.

Diego Costa ran through to equalise with a placed finish, before Koke headed in Atletico's second.

The hosts had Aymeric Laporte dismissed late on when he was shown a second yellow card for a foul on Costa.

Atletico maintain their one-point lead over Barcelona, who edged Espanyol 1-0 earlier on Saturday.

The win was Atletico's fifth in succession in the league, but they were made to work hard for it by a Bilbao side who have been formidable at home.

Prior to the visit of Atletico, they had lost just once inside their own ground all season.