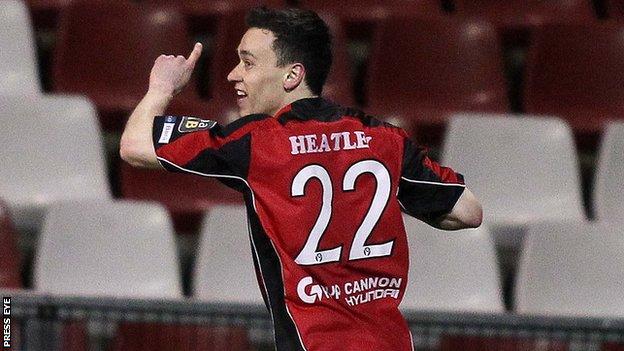 Crusaders moved up to third place in the Irish Premiership table after two Paul Heatley goals helped them beat Glentoran in Tuesday's game at Seaview.

Heatley put the Crues ahead on 11 minutes after a Glentoran mistake had gifted possession to Declan Caddell.

After both teams had gone close, Jordan Stewart levelled for the Glens on 36 minutes after a Curtis Allen cross.

After Heatley's second goal, Crusaders keeper Sean O'Neill had to make a couple of fine saves to deny Calum Birney and Jim O'Hanlon.

A lively first half began with fit-again Timmy Adamson hitting straight at Glens keeper Elliott Morris in the third minute.

However, the Crues did take the lead on 11 minutes as Heatley found the net after being played in by Caddell.

As Glentoran improved, Sean O'Neill had to make a fine save to deny Kevin Bradley and the visitors did level on 36 minutes as Stewart poked in Allen's low cross.

The action continued to be end to end before the break as Richard Clarke had an effort cleared off the line by Niall Henderson with O'Neill then saving an Allen head.

Crusaders regained the lead on 56 minutes as the fleet-footed Heatley skipped past Garrett before slotting home.

Adamson then had an effort well saved by Morris but the home side had O'Neill to thank as he brilliantly saved a Birney header and O'Hanlon's point-blank chance.