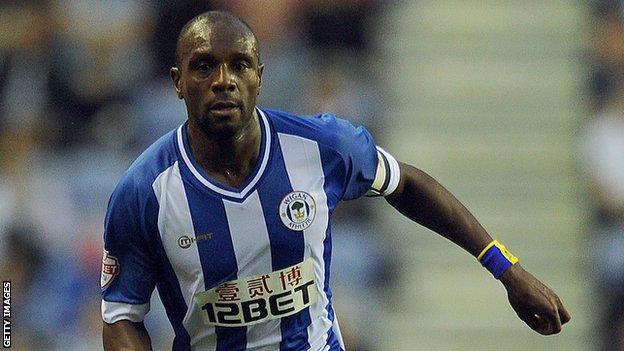 Defender Emmerson Boyce believes Wigan have the depth within their squad to cope with a congested fixture schedule.

The Latics, who are fifth in the Championship and five points inside the play-off spots, will play their 50th game of the season at QPR on Tuesday.

"The games are coming thick and fast and it's going to test our squad," Boyce told BBC Radio Manchester.

"We feel strong and confident that we're always going to win, we've got so much firepower."

They continue their defence of the trophy against Arsenal in a Wembley semi-final on 12 April.

He added: "We've picked up a few injuries but hopefully we'll get a few back. You never know where you'll end up at the end of the season."

Wigan's run to the last four of the FA Cup and their early-season involvement in the Europa League - their reward for winning last season's competition - have left the Latics several games behind a number of their Championship rivals for much of the campaign.

They could have as many as 15 fixtures still to play this term if they reach the FA Cup final for the second consecutive year and also make it to the Championship play-off final.

Uwe Rosler's side are unbeaten in 10 matches in all competitions, winning nine of them, and came from 1-0 down to beat Watford 2-1 on Saturday.

"As a player, you just want to play as many games as you can and, fingers crossed, we can get through them," added Boyce, 34.

"The manager sets us up to win games and we've got a belief in the team.

"Even if we go a goal down, we feel we've got the character to come back and our bench is very strong."