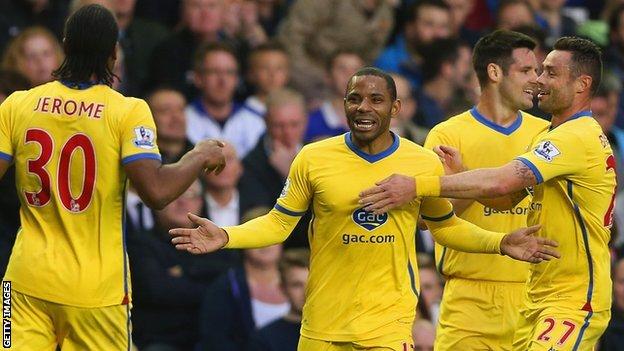 Everton handed the initiative back to Arsenal in the race for fourth as their seven-match winning streak ended with a damaging defeat to Crystal Palace.

Cameron Jerome added a third for the Eagles before Kevin Mirallas reduced the deficit from close range.

Defeat for the Toffees mean they remain fifth, a point behind the Gunners, with four matches remaining.

Palace, who go 11th, have reached the 40-point mark often seen as a benchmark for top-flight safety with a fourth successive win.

Manager Tony Pulis appears to have accomplished the mission of Premier League survival he took on when he accepted the job in November with the club bottom of the table.

But Everton boss Roberto Martinez now needs a response from his side when predecessor David Moyes returns to Goodison Park with Manchester United on Sunday.

It was an unusually lacklustre display from Martinez's side as they paid the price for defensive lapses against a speedy and strong Palace side who were good value for their victory.

Restored to the starting line-up, Ross Barkley provided another glimpse of his exciting talent when he beat two men with a jinking run on the edge of the box before going down inside the penalty area too easily.

Then Aiden McGeady saw a long-range curler flash over after he had neatly stepped inside Mile Jedinak.

However, it was the visitors who took the lead.

Keeper Tim Howard could only palm Yannick Bolasie's cross back into the danger zone and Marouane Chamakh's intelligent lay-off to Puncheon was clinically dispatched with a left-footed half-volley inside the post.

Pulis's team almost doubled their advantage via Bolasie, whose pace and power posed persistent problems for the home side.

The winger controlled a Julian Speroni goal kick before outmuscling Seamus Coleman and driving a 20-yard effort against the foot of a post.

McGeady saw another curler fly narrowly wide, while Speroni saved superbly at his near post to thwart Romelu Lukaku.

Everton's job got even harder when Dann took advantage of some slack marking to nod home his first Eagles goal four minutes after the restart.

However, the deficit was halved with 12 minutes left when a deep cross from Mirallas was headed back across goal by Leighton Baines for substitute Naismith to bundle the ball home.

Osman, another substitute, came close to pulling Everton level when a flicked effort with the outside of his boot was kept out by Speroni.

But Puncheon teed up Jerome for Palace's third, the former Stoke man lashing a low shot inside the post.

Mirallas ensured a tense finish when he lifted the ball over Speroni for Everton's second, but the visitors took all three points.

Prior to the game, which was attended by Liverpool manager Brendan Rodgers, the home club had paid tribute to the 96 who died in the Hillsborough disaster, with supporters holding a line of Everton and Liverpool scarves tied together along the pitch.