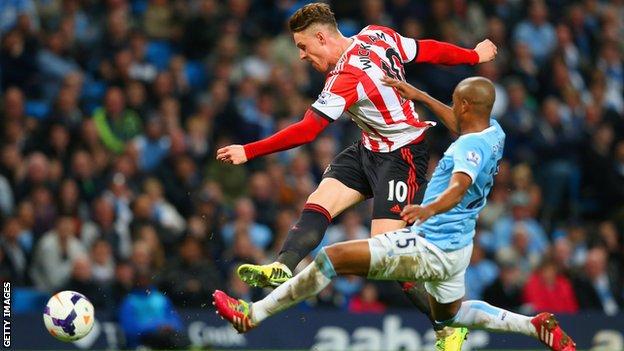 Manchester City suffered a serious blow to their Premier League title ambitions as they were held to a draw by bottom club Sunderland.

City gained a second-minute lead with Fernandinho's powerful effort, but went behind as Connor Wickham scored twice in quick succession after the break.

City are six points behind leaders Liverpool and four behind Chelsea.

They could have been even further adrift of the top two because Manuel Pellegrini's team were fortunate to earn their late equaliser, as Mannone agonisingly let Nasri's shot slip out of his grasp.

Nasri then went close to snatching a winner in the 90th minute, but his anguished reaction showed how his team's prospects have now changed.

City's hopes of repeating their Premier League success of 2012 now rely on both Liverpool and Chelsea slipping up during the final weeks of the season.

The draw was just as unsatisfactory for Sunderland, who were the better team for large periods of the game, and missed out on a chance to further close the gap on their relegation rivals.

Gus Poyet's side are six points from safety with a game in hand on the three teams above them - Cardiff, Fulham and Norwich - and the Sunderland boss will curse the way his team let victory slip.

The Black Cats have been on a wretched run of form since they lost to Manchester City in the Capital One Cup final on 2 March, having taken one point from their last six league games before this match.

But they arrived at this re-arranged fixture with a decent record against City and, despite the early opener, created several good chances throughout the game.

Had John O'Shea hit the target from two close-range headers or Fabio Borini squared the ball to one of two better-placed team-mates the picture could have looked very different before half-time.

Coming three days after an energy-sapping defeat at title rivals Liverpool, City were without David Silva and struggled for fluency. Yet Fernandinho's fifth goal of the season gave them a lead to defend.

It was a well-worked strike so early in the contest. Alvaro Negredo dispossessed Lee Cattermole and then stepped over Sergio Aguero's pass, allowing the Brazilian midfielder time to fire in at the near post.

Having last won a league game at Newcastle on 1 February, Sunderland did not let the early goal affect them and were spurred on by former City player Adam Johnson.

At times, Sunderland appeared to over-step the mark as Aguero, making his first start since returning from injury, was hacked down by Wes Brown.

After their positive start the Black Cats faded. Pellegrini's side grew in status and Aguero's deflected shot tested Mannone before the Argentine was replaced by Stevan Jovetic.

That all changed when Emanuele Giaccherini came off the bench to inspire the visitors.

First, he crossed for Wickham, who tucked in at the back post for his first Sunderland league goal since October 2011. The Italian substitute then found the on-rushing English striker as he beat Joe Hart at the near post.

Sunderland stood on the verge of a famous win, but then Mannone clawed at thin air after he failed to grasp Nasri's shot from 12 yards.