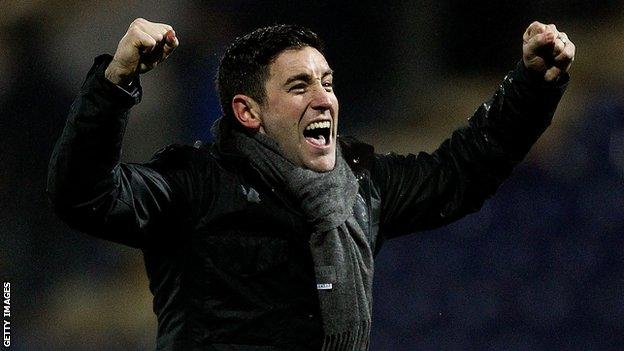 Manager Lee Johnson says chairman Simon Corney remains "as passionate as ever" about Oldham, despite threatening to resign if the Latics are relegated.

Johnson's side are 18th in League One and moved four points above the drop zone by beating Crawley on Saturday.

"So much of a winner is he [Corney], he would feel like he had personally failed if we didn't [stay up]," Johnson, 32, told BBC Radio Manchester.

"Having spoken to him, he's just as passionate as ever about the club."

Oldham boss Johnson continued: "I certainly don't want any blood on my hands. I want to stay and kick on next year, but we'll only do that by getting the required wins towards the end of the season."

Corney, who took control of the Latics in 2003, told the Manchester Evening News he would resign as chairman and consider selling the club if Oldham were relegated from the third tier.

Earlier this season he reiterated his desire to bring fresh funds into Boundary Park from suitable investors, although a possible takeover by Marwan Koukash - the owner of rugby league outfit Salford Red Devils - stalled after initial talks.

On the field, Oldham have eight games to secure their League One status, starting at third-placed Leyton Orient on Tuesday.

"It will still be tight because we've got two tough games coming up and we've got some real crunch games after that," said Johnson, who recently celebrated a year as manager.

"We've just got to keep plugging away. Saturday was a good effort moving towards that goal but there's still time to go."