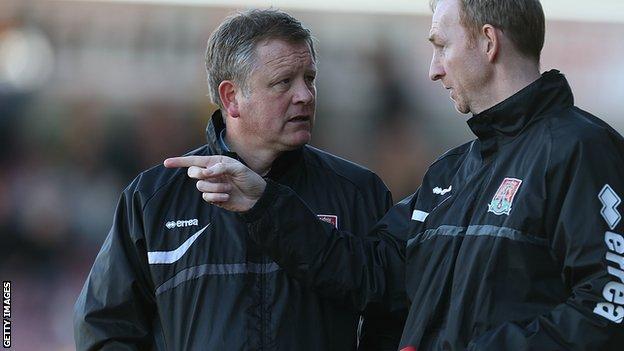 Northampton Town boss Chris Wilder says their fans can put them on the "front foot" in their remaining home games.

The Cobblers are three points from safety in League Two and play five of the last eight matches at Sixfields.

Wilder told BBC Radio Northampton: "If a crowd's 100% with you, it gives you that extra yard, an extra foot if you're jumping for a header and that energy to do that extra bit.

"Everybody wants the same outcome when the season finishes."

With the influx of new players and new ideas, very rarely you just click your fingers and it goes as smoothly as you want

He continued: "We've brought a lot of players in and they're giving it a right go.

"In the Southend game, we got the support going and we were on the front foot. We need a high-energy game, closing down from the front, making tackles and headers, winning races and to play in their half.

"I'm sure if we can do that, the support will be 100% right behind us. The part that they've got to play is a really big one."

Since Wilder took charge, the Cobblers have won four and drawn five of their 12 matches.

Despite the fact they remain in the relegation zone, which they entered in September, Wilder says they have a real opportunity to move out of the bottom two this week, playing AFC Wimbledon and Bury at home.

"With great respect to both opponents, these are games we feel - if we play well - we can win. We have to show those qualities from the six games unbeaten and from Saturday, and hopefully last Tuesday [a 3-0 home loss to Rochdale] will be a distant memory.

"With the influx of new players and new ideas, very rarely you just click your fingers and it goes as smoothly as you want. On the whole, the attitude and the application has been really good and the support has got a massive part to play. But we have to set that off."