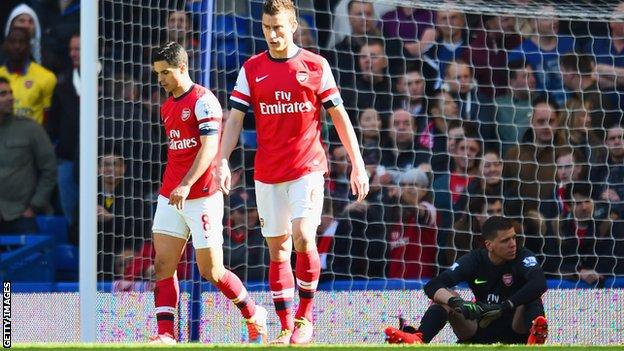 Arsenal midfielder Mikel Arteta has apologised for their performance in Saturday's 6-0 defeat at Chelsea.

The Gunners conceded four goals in the first half and also had Kieran Gibbs sent off in what was manager Arsene Wenger's 1,000th game in charge.

A day to forget

"I don't know what else to say apart from sorry to everyone at the club and the fans," said Arteta.

"We promise that we will try hard to put that right."

Arsenal, who have suffered six league defeats this season, host Swansea on Tuesday.

Arteta added: "You cannot only just move on, you have to analyse what you have done and react.

"I am expecting a big reaction on Tuesday because Saturday was not good enough for this football club."