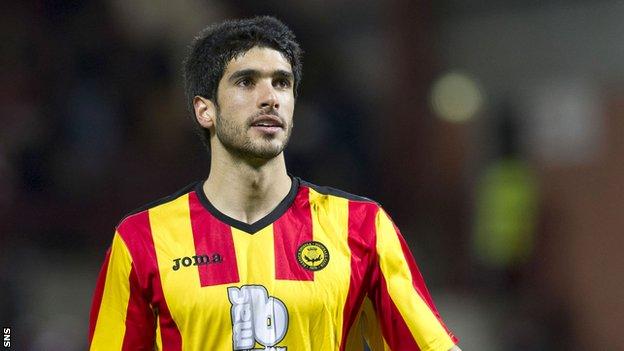 Gabriel Piccolo believes Partick Thistle are equipped to avoid relegation from the Scottish Premiership this season.

Thistle are in ninth spot, only two points ahead of second-bottom St Mirren in the relegation play-off spot.

Five teams could yet join doomed Hearts in dropping to the Championship.

Asked if Thistle were better than the others, defender Piccolo said: "I can't say that, but we have to demonstrate that. I think we're doing that."

The Glasgow side have only won two of their last 10 fixtures, but those came at home - their first at Firhill this season.

To be honest, we're not thinking about going down, we're just thinking of staying up

"We are in very good form and we are getting better and have become a very good side," Piccolo told BBC Scotland.

"Teams respect us home and away and I think we'll be alright.

"To be honest, we're not thinking about going down, we're just thinking of staying up; that's our mentality."

If Thistle are to maintain their winning run at home, they must overcome runaway Scottish Premiership leaders Celtic on Wednesday.

Thistle's Glasgow rivals could have the chance to wrap up the title at Firhill should Aberdeen drop points away to Ross County the previous evening.

"It is a good game to compare ourselves with the league leaders," said 24-year-old Piccolo, who arrived from Rayo Vallecano in the summer.

"But no matter who comes to Partick, we are playing 11 versus 11, so we're confident of playing our game and getting something from it."

Piccolo believes Thistle are benefitting from staying true to their philosophy of passing football.

Asked why their home form had improved, he said: "For sure, learning from our mistakes. We still believe in our style and just being a better, strong side and things are going our way.

"We have to be focused and can't make mistakes - if we give them any chances, they will punish us."